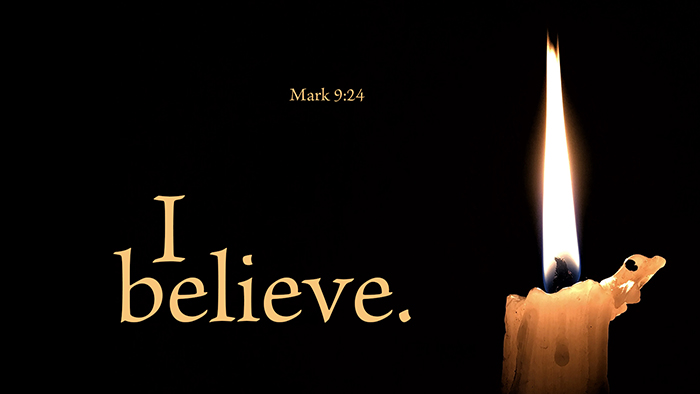 From the Word: The father of the child cried out at once, saying, “I believe; help my unbelief.” (Mark 9:24)

I believe in God, the Father Almighty, creator of heaven and earth.

I believe in Jesus Christ, his only Son, our Lord. He was conceived by the power of the Holy Spirit
and born of the Virgin Mary. He suffered under Pontius Pilate, was crucified, died, and was buried. He descended into hell. On the third day he rose again. He ascended into heaven, and is seated at the right hand of the Father. He will come again to judge the living and the dead.

I believe in the Holy Spirit, the holy catholic Church (or holy Christian church), the communion of saints, the forgiveness of sins, the resurrection of the body, and the life everlasting. Amen

Pulling It Together: The English word “creed” comes from the Latin credo, which means, “I believe.” A creed is a statement of what one gives credence to, finds credible. This is what is happening when you say the Apostles’ Creed. You are reminding yourself of what you believe, and are recommending your belief as something worthy of acceptance by others (1 Tim 1:15). As such, the Creed is a statement of faith and a tool of evangelism.

Prayer: I believe in you, Lord; help my unbelief. Amen.