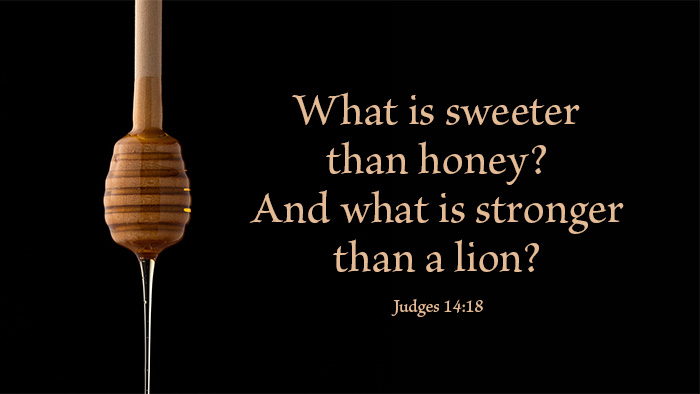 From the Word: And the men of the city said to him on the seventh day before the sun went down,

“What is sweeter than honey?
And what is stronger than a lion?”

And he said to them,

“If you had not plowed with my heifer,
You would not have learned my riddle.” (Judges 14:18)

But the greatest abuse occurs in spiritual matters, which pertain to the conscience, when false preachers rise up and market their lying conceits as God’s Word.

Pulling It Together: As one would imagine, there are stark differences between Samson and Jesus. Samson took whatever his flesh desired. Jesus wanted what his Father willed. Samson killed to get what would not come to him naturally. Jesus was an uncomplaining lamb, led to the slaughter. Samson ate what was forbidden to him. Jesus, acquainted with fasting for weeks on end, feasted on spiritual fare (John 4:32). Samson spoke in riddles in order to have his way over men. Jesus spoke the word of the Lord, so that people would be reconciled with God.

There is a riddle in the answer given Samson by the men of Timnah. “What is sweeter than honey? And what is stronger than a lion?” The answer is as profound as it is obvious. God’s Word is sweeter than honey (Psa 119:103) and the Lord is abundant in strength (Psa 147:5). Those who trust in his sweet strength will not be led astray by the heresies of false preachers.

Prayer: Help me to desire your will, Lord. Amen.