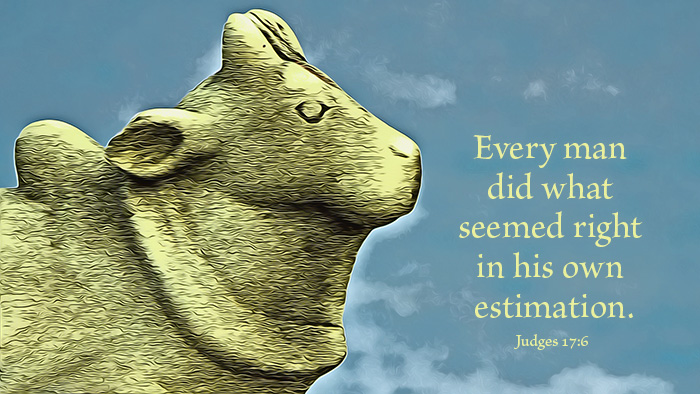 From the Word: In those days there was no king in Israel. Every man did what seemed right in his own estimation. (Judges 17:6)

So then, let us learn and take to heart the great importance of this commandment, that with all diligence we may guard against and dread every misuse of the holy name as the greatest sin that can be outwardly committed. For to lie and deceive is itself a great sin, but it is greatly magnified when we attempt to justify and authorize it by invoking the name of God, and use it as a cloak to conceal our shame. So, from a single lie a double lie results. Indeed, the result is multiple deceits.

Pulling It Together: Micah stole a great sum of money from his mother, then returned it because he feared her curse. She then dedicated it to the Lord, evidently hoping to amend the curse that ended up being upon her son. But, instead of devoting the 1,100 pieces of silver, she only gave 200 pieces to be made into an idol. One might put the best construction on her actions by assuming the other 900 were for the ongoing upkeep of the idol, yet the text gives no such impression. However, the son was able to make an ephod and a shrine, so one wonders if the remaining silver ended up in his possession once again. All of this was done in the name of the Lord. In other words, these things were carried out as a way of seeking God’s favor.

Later, Micah, the son, hired a wandering Levite to be a priest to him. One must wonder again, if his wage was from the remaining silver. The priest’s employment was also done in the name of the Lord, seeking his favor by manipulating God’s reputation. “Now I know that the Lord will prosper me,” (Judges 17:13) Micah said, all because he took matters into his own hands, and called it God’s will.

Prayer: Thy will be done, Father. Amen.

This volume in the series, "Old Places, New Faces," The General Epistles offers a series of 12 Bible studies based on Hebrews, James, I & II Peter, I, II, & III John, and Jude. The geographical locations of Biblical characters can symbolically refer to places we find ourselves with respect to our faith. As we become more acquainted with our spiritual geography, we will better discern where God would have us go or what changes we need to make in order to serve him better.