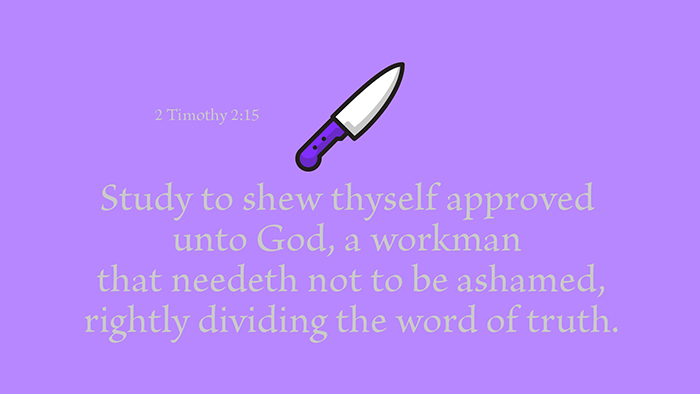 Socrates, in the Phaedrus of Plato, says that he is especially fond of divisions, because without them nothing can either be explained or understood in a discussion, and if he discovers someone skillful in making divisions, he would attend him and follow in his footsteps as those of a god. He instructs the divider to separate the members at their very joints, lest like an unskillful cook, he sever the member at the wrong place. But the adversaries despise these principles, and so, according to Plato, are truly kakoi mavgeiroi or poor butchers, since they mutilate the members of the concept of “sacrifice,” as will be understood when we have enumerated the types of sacrifice.

Pulling It Together: It is critical to have a right understanding. Our modern English Bible translations use the phrase, “rightly handling the word of truth.” The King James Version puts a finer point on the phrase by following William Tyndale’s lead in literally translating the phrase as “rightly dividing the word of truth.” The idea here is that one should cut straight when reading the Bible. One should correctly analyze the word. This happens best when the plain truth of the Word is sought, allowing Scripture to interpret itself instead of filtering the Word with traditions and human philosophy. The latter too often leads to a butchering of the Word. What does Scripture have to say about a subject? That is the proper question when one wishes to rightly handle or divide God’s Word.

Prayer: Holy Spirit, lead me as I read your Word. Amen.