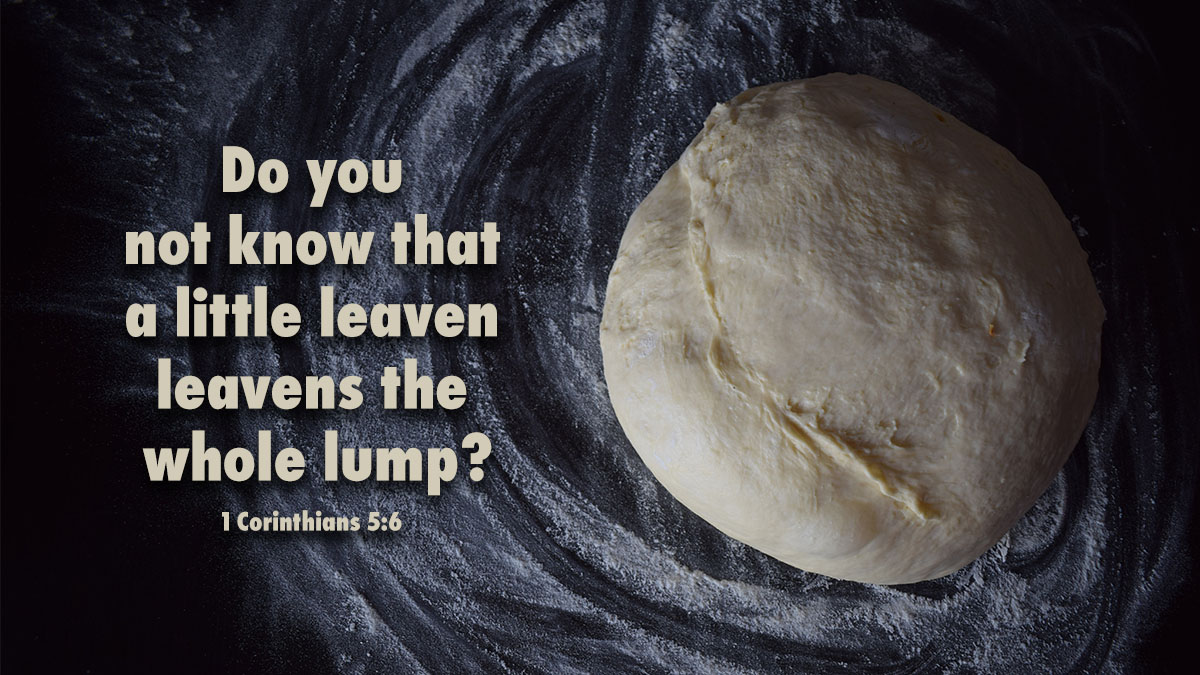 1 It is actually reported that there is immorality among you, and of a kind that is not found even among pagans; for a man is living with his father’s wife. 2 And you are arrogant! Ought you not rather to mourn? Let him who has done this be removed from among you. 3 For though absent in body I am present in spirit, and as if present, I have already pronounced judgment 4 in the name of the Lord Jesus on the man who has done such a thing. When you are assembled, and my spirit is present, with the power of our Lord Jesus, 5 you are to deliver this man to Satan for the destruction of the flesh, that his spirit may be saved in the day of the Lord Jesus. 6 Your boasting is not good. Do you not know that a little leaven leavens the whole lump? 7 Cleanse out the old leaven that you may be a new lump, as you really are unleavened. For Christ, our paschal lamb, has been sacrificed.

Leaven is a common figure with the apostle, one he uses frequently, almost proverbially. Christ also gives us a Scripture parable of the leaven. It is the nature of leaven that a small quantity mixed with a lump of dough will pervade and fill the whole lump until its own acid nature has been imparted to it. This Paul makes a figure of spiritual things in doctrine and life. In the Epistle to the Galatians, he makes it more especially typify false doctrine. For the introduction of an error in an article of faith will soon work injury to the whole and result in the loss of Christ. Such innovation will pursue its course with destructive sweep until even the uncontaminated part becomes worthless; the once pure mass is wholly corrupted.

But in this text he has reference more particularly to an erroneous idea concerning life and conduct. Here it is likewise true that, once the flesh be allowed any license, and liberty be abused, and that under the name of the gospel, there is introduced a leaven which will speedily corrupt faith and conscience, and continue its work until Christ and the gospel are lost. Such would have been the fate of the Corinthians had not Paul saved them from it by this epistle, admonishing and urging them to purge out the leaven of license; for they had begun to practice great wantonness, and had given rise to sects and factions which tended to subvert the one gospel and the one faith.

Nor may we in our works and in our daily life tolerate the yielding to the wantonness of the flesh and at the same time boast the gospel of Christ, as did the Corinthians, who stirred up among themselves divisions and disorder, even to the extent of one marrying his stepmother. In such matters as these, Paul says, a little leaven leavens and ruins the whole lump—the entire Christian life. These two things are not consistent with each other: to hold to the Christian faith and to live after the wantonness of the flesh in sins and vices condemned by conscience. Paul elsewhere warns, “Be not deceived, neither fornicators, nor idolaters, nor adulterers, nor effeminate, nor abusers of themselves with mankind, nor thieves, nor drunkards, shall inherit the kingdom of God.”

Luther, Martin, and John Sander. Devotional Readings from Luther’s Works for Every Day of the Year. Augustana Book Concern, 1915, pp. 126–27.