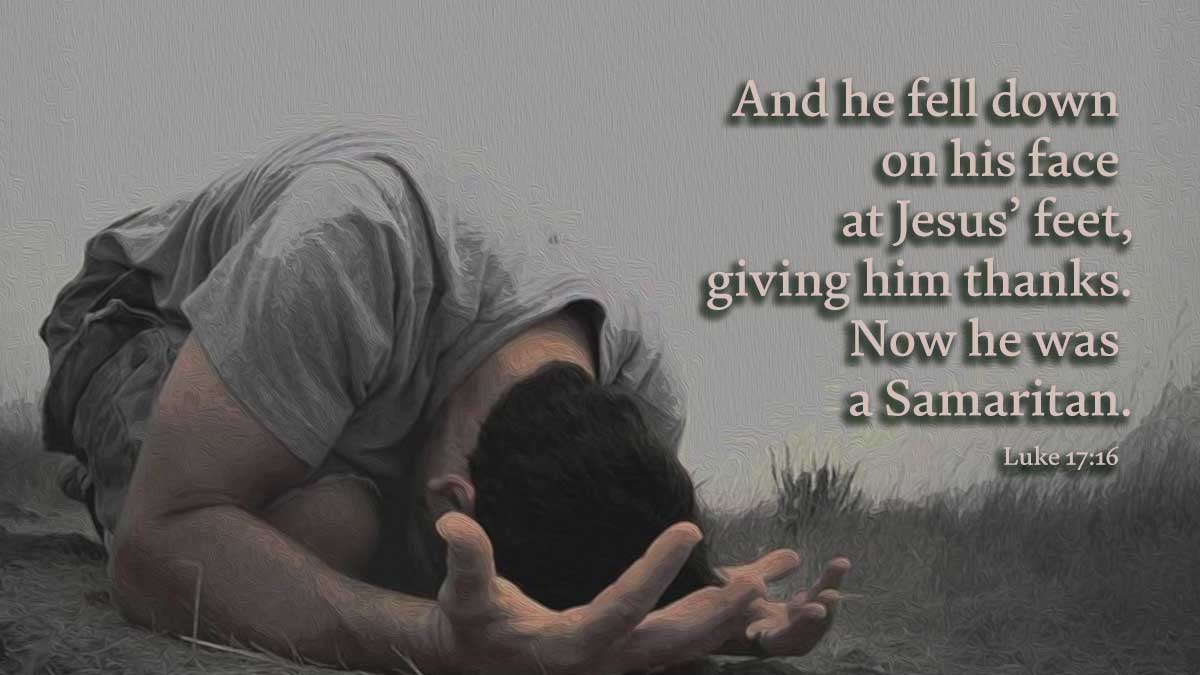 11 On the way to Jerusalem he was passing along between Samaria and Galilee. 12 And as he entered a village, he was met by ten lepers, who stood at a distance 13 and lifted up their voices and said, “Jesus, Master, have mercy on us.” 14 When he saw them he said to them, “Go and show yourselves to the priests.” And as they went they were cleansed. 15 Then one of them, when he saw that he was healed, turned back, praising God with a loud voice; 16 and he fell on his face at Jesus’ feet, giving him thanks. Now he was a Samaritan.

Why was it necessary for the evangelist to write that this one leper was a Samaritan? By this he opens our eyes and warns us that God has two kinds of people who serve him. The one kind has the appearance and name of having a great, spiritual, holy life, wholly wrapped up in it, but all in vain. They are nothing more than ravenous wolves in sheep’s clothing. Yet they have the honor and are regarded as the true worshipers of God; therefore goods, friendship and everything the world has comes to them. The others are of the opposite appearance, and are without show or name, as though no one were less God’s people than they.

The Jews alone had the name of being God’s people, and they alone had God and his worship in preference to all other people on the earth. They hated the Samaritans above all nations, for they too claimed to be God’s people along with the Jews; therefore a Samaritan was to them as an apostate Christian is to us. It is true that the Samaritans did not have the right belief and that the Jews had the true law of God. But as God loves the truth and is an enemy to hypocrisy with all its boasting, he turns it round and accepts the Samaritans and lets the Jews go. Thus it happens that they are not his people who still have the name, the appearance and honor of his people. Again, they who are his people, and have the name and appearance, are regarded as heretics, apostates and the devil’s children.

So it is even at the present time. The clergy, priests and monks call themselves and are regarded the servants of God. No one is a Christian who does not believe as they do, although no one is less a Christian. Those whom they regarded as heretics, many of whom they have burned and exiled, dare not be called Christians, although they alone are the true Christians. No one falls on his face at the feet of Christ, except the Samaritans, the despised, the condemned, the accursed. Therefore let us guard against everything that makes only a show, it certainly is deceiving; and let us not reject what does not make a display, so that we do not reject Christ and God, as the Jews did.

Luther, Martin, and John Sander. Devotional Readings from Luther’s Works for Every Day of the Year. Augustana Book Concern, 1915, pp. 347–48.