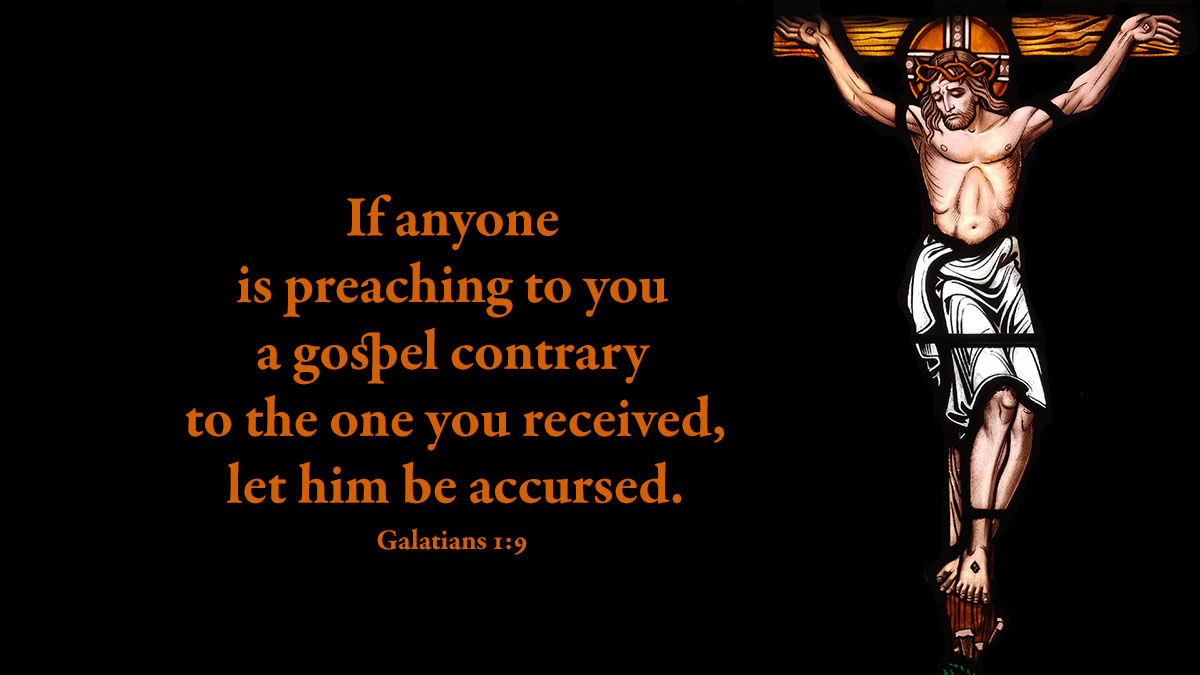 As we have said before, so now I say again, If any one is preaching to you a gospel contrary to that which you received, let him be accursed

God often in this life lays hold upon leaders of sects who blaspheme and slander him with their false doctrines. He inflicts upon them unusual punishments for the sake of warning others. All men must admit that God can have no pleasure in their doctrine, since he visits them with special marks of his displeasure, destroying them with severer punishment than ordinary befalls offenders.

History records that John the evangelist had as contemporary a heretic named Cerinthus, who first arose in opposition to the apostolic doctrine and in blasphemy against the Lord Jesus with the claim that Jesus is not God. This blasphemy spread to such an extent that John saw himself compelled to supplement the work of the other evangelists with this gospel, whose distinct purpose it is to defend and maintain the deity of Christ against Cerinthus and his rabble. Having on a certain occasion gone to a public bath with some of his disciples, John became aware that Cerinthus and his rabble were also there. Without hesitation he told his disciples to be up and away, and not abide among the blasphemers. The disciples followed his advice and departed. Immediately after their departure the building collapsed, and Cerinthus and his followers perished.

We also read concerning the heretic Arius, the chief foe of his time to the dogma of the deity of Christ. The injury done to the cause of Christ by this man occupied the Church for four centuries after his death; and to-day his heresy has not been entirely rooted out. With an oath Arius had impressed the emperor and his counsellors with the righteousness of his doctrine. The emperor commanded Alexander, the bishop, to restore him to the priestly office. The bishop resolved to seek help from God, where alone it is found in all things relating to God’s honor. He prayed all night long that God should preserve his name and honor, and Christendom against the heretics. In a pompous procession the following day Arius suddenly became ill, withdrew, and died. Thus we see that God has preserved this doctrine against the devil and his blasphemers, and he shall preserve it in the future, that we may believe in God the Father, God the Son, and God the Holy Spirit.

Luther, Martin, and John Sander. Devotional Readings from Luther’s Works for Every Day of the Year. Augustana Book Concern, 1915, pp. 202–03.