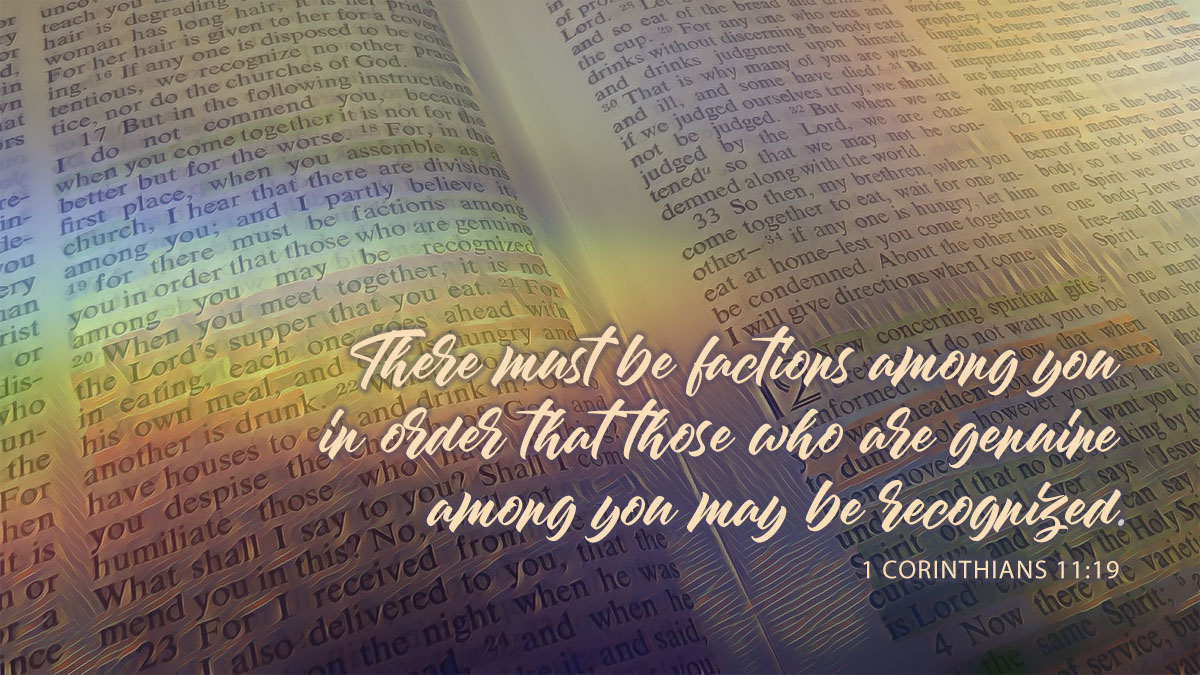 17 But in the following instructions I do not commend you, because when you come together it is not for the better but for the worse. 18 For, in the first place, when you assemble as a church, I hear that there are divisions among you; and I partly believe it, 19 for there must be factions among you in order that those who are genuine among you may be recognized. 20 When you meet together, it is not the Lord’s supper that you eat. 21 For in eating, each one goes ahead with his own meal, and one is hungry and another is drunk.

Discord is a deplorable offense among Christians, putting them in the worst possible light, and making it impossible for them to steer clear of factions. Divisions are an offense to the world’s wisest and best, who cry out, “If the Christians’ doctrine were true, they would preserve unity among themselves, but as it is, they envy and slander and devour one another.” But we cannot altogether prevent discord in the Church. For wherever the Word of God has a foothold, there the devil will be. By the agency of his factions he will always build his taverns and kitchens by the side of God’s house. So he did at first in Paradise. He entrenched himself in the family of Adam, establishing there his church. Such has been his practice ever since, and doubtless ever will be. He who takes offense at differences in the Church, who when he sees any discord at once concludes there is no Church there, will in the end miss both Church and Christ. You will never find any congregation of such purity that all its members are unanimous on every point of belief and teaching and all live in perfect harmony.

Paul had experience in this matter in the case of the beautiful and famed Church of Corinth, which he himself had planted and taught two years. Soon after his departure they began to disagree about their preachers and to attach themselves to certain ones—some to Paul, some to Peter, some to Apollos. Though they had been unanimous in their doctrine, yet men would cleave to a certain one because he was more gifted than the others, could speak better, or was more attractive in personal appearance. And among the ministers of the Church, if one had a special gift or office, he thought he ought to be a little better and a little greater than the others. Necessarily, from such division and inharmony grew hatred, strife and jealousy, resulting in great injury and disorder to the Church. We must, as far as possible, guard against this fatal evil, though we cannot altogether keep it out of the Church.

Luther, Martin, and John Sander. Devotional Readings from Luther’s Works for Every Day of the Year. Augustana Book Concern, 1915, pp. 256–57.