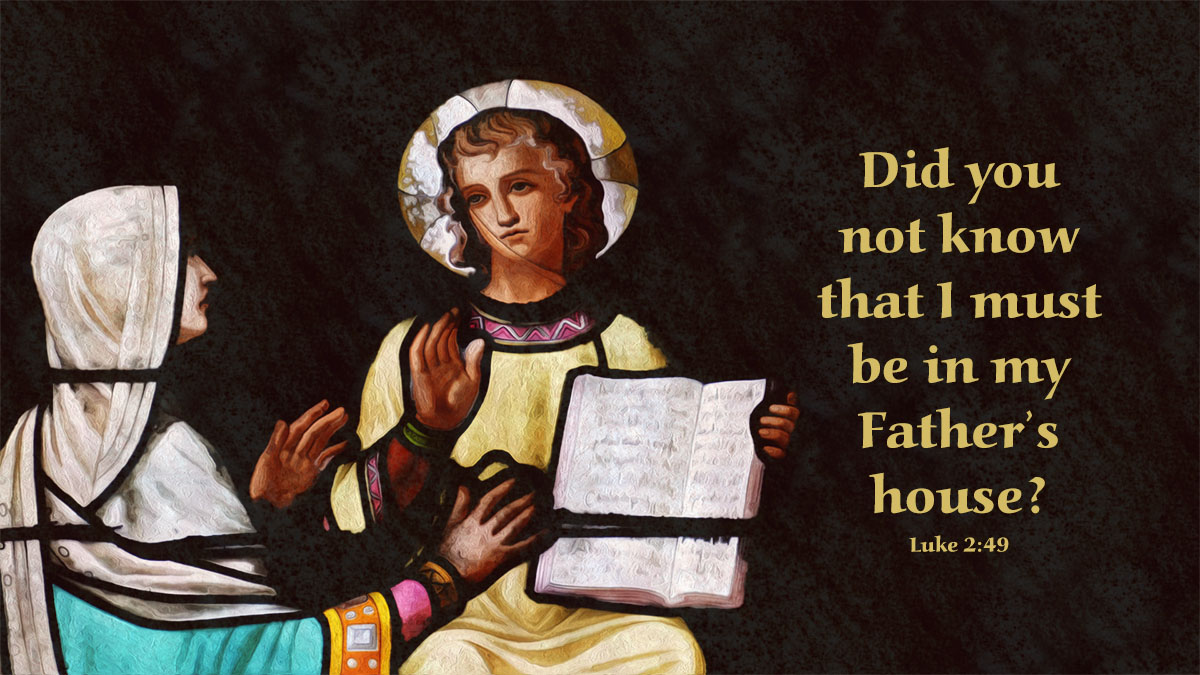 41 Now his parents went to Jerusalem every year at the feast of the Passover. 42 And when he was twelve years old, they went up according to custom; 43 and when the feast was ended, as they were returning, the boy Jesus stayed behind in Jerusalem. His parents did not know it, 44 but supposing him to be in the company they went a day’s journey, and they sought him among their kinsfolk and acquaintances; 45 and when they did not find him, they returned to Jerusalem, seeking him. 46 After three days they found him in the temple, sitting among the teachers, listening to them and asking them questions; 47 and all who heard him were amazed at his understanding and his answers. 48 And when they saw him they were astonished; and his mother said to him, “Son, why have you treated us so? Behold, your father and I have been looking for you anxiously.” 49 And he said to them, “How is it that you sought me? Did you not know that I must be in my Father’s house?”

All things belong to the Father. He gave us the creatures to use in our earthly life according to our best understanding. One thing he reserved for himself, which is called holy and God’s own, and which we are to receive from him in a special manner. This is his holy Word, through which he rules the hearts and consciences, and makes holy and saves us. Hence Christ is in his Father’s business, when he speaks to us through his Word and by means of it leads us to the Father.

He reproves his parents because they had erred and had sought him among earthly and human affairs, among friends and acquaintances. He will not permit himself to be found in anything outside of his Word. He does not wish to be worldly, nor in that which is worldly, but in that which is his Father’s, as he always manifested from his birth through his entire life. He was in the world, but he did not conform to the world. To Pilate he said: “My kingdom is not of this world.” He waits alone on that which is his Father’s, i. e., the Word. Faith has no other foundation to stand on. Hence, the wisdom, thoughts and hopes of the mother of Christ and of Joseph must fail while they were seeking him in other places. For they did not seek him as they ought, but as flesh and blood do, which always gropes after other comfort than that of the Word; for it always wants what it can see and feel, and acquire by meditation and reason.

God permits them to fail in order that they may learn that all comfort not based on the Word, but on flesh and blood, on men and all other creatures, must inevitably fail. Here everything must be abandoned: friends, acquaintances, the whole city of Jerusalem, and everything belonging to these and to men; for all this neither gives, nor aids comfort, until the Lord is sought in the temple, since he is in that which is his Father’s. There he can truly be found and the heart is made to rejoice, otherwise it would have to remain without the least comfort.