Fun With the First Article
by James A. Nestingen
Connections Magazine - November 9, 2018
from the July/August 2018 issue

The whole first article of the Apostles Creed, short enough in itself, can be summed up in two words. In the article, Christians confess, “We believe in God the Father almighty, creator of heaven and earth.” The two words are gift and when we pray, obligation.

Often enough, the gifts of God in creation are hidden amidst all the demands and duties of family life, jobs, and the requirements of citizenship. Generally, meals don’t arrive at the table already cooked. Though it can happen, children don’t just jump out of bed, eager for their responsibilities. Often enough, work is just that—a seemingly unending flow of things to be done, mixed up in amalgam of boredom and friction. Public life brings with it its own set of apparently unresolvable tensions.

But every once in awhile, gifts peek through in an unmistakably gracious way. Young love, an older couple holding hands, a troubled child finally smoothing things out, freshly cut grass, even the sound of a distant train whistle provide reminders that there is something bigger than ourselves at work in things. And then when a sense of giftedness takes over gifts appear everywhere, even in the mundane things that can just as well pass without comment: good coffee, a children’s choir, a solitary whistler. 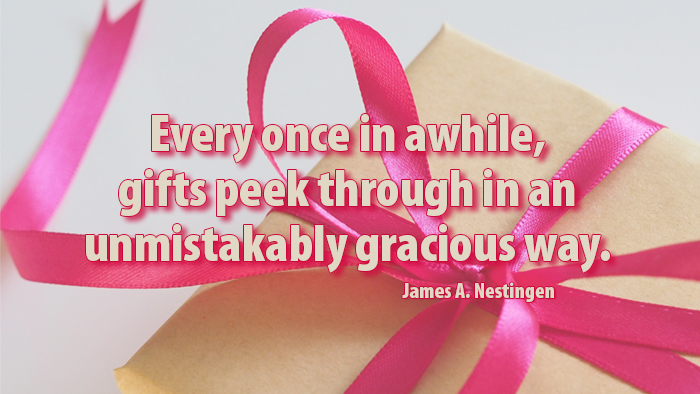 God the Father almighty, whom we name in confessing the creed, is biblically the giver of every good and perfect gift. We do not use the word

“Father” as an analogy in comparison with our dads. Fine as they can be, they can also be awful, leaving people haunted. We speak of God as Father because Christ Jesus taught us to use this name. It wasn’t completely original with him. He knew as well as anyone that the heavenly Father can be as difficult to deal with as any earthly papa. But Christ Jesus made explicit the grace implicit in all the gifts of life. So he said, “When you pray, pray like this, ‘Our Father in heaven….’”

So we pray, among other bids, “give us this daily bread.” As Martin Luther explains in his Small Catechism, when we make such a request we are not just asking for what’s on the table. We are asking that God will make us sensitive to and appreciative of all the gracious gifts with which God creates and sustains daily life.

We have to pray for this confidence because the other word essential to the first article of the creed has a way of sounding itself so loudly and continuously that soon that is all we hear. “Get up,” “make your bed,” “don’t forget your homework,” “you have to leave early because of the traffic,” “I want this done before you leave work,” “we can’t get this done without volunteers,” obligations compound themselves until they arrive one after another, seemingly without end.

They do so because we live in a community of neighbors who depend on us just as we depend on them. In fact, without obligations the gifts

don’t spread. Farmers seed and harvest, milk and muck, so that rest of us can eat. Teachers sit up in the evenings writing lesson plans and endure faculty meetings so that students learn something more than mischief. The gifts of everyday life arise out of the drudgery and delights of labor. The two go together, hand in hand.

So the First Article of the Creed requires the second. God the Father almighty sent his son, Jesus Christ our Lord, to put the obligations in their place, to take grace out of its harnesses and let it flow freely in his promises. That’s the Second Article and after that, there is a third, announcing the work of the Holy Spirit in and through you. The fun has just begun.