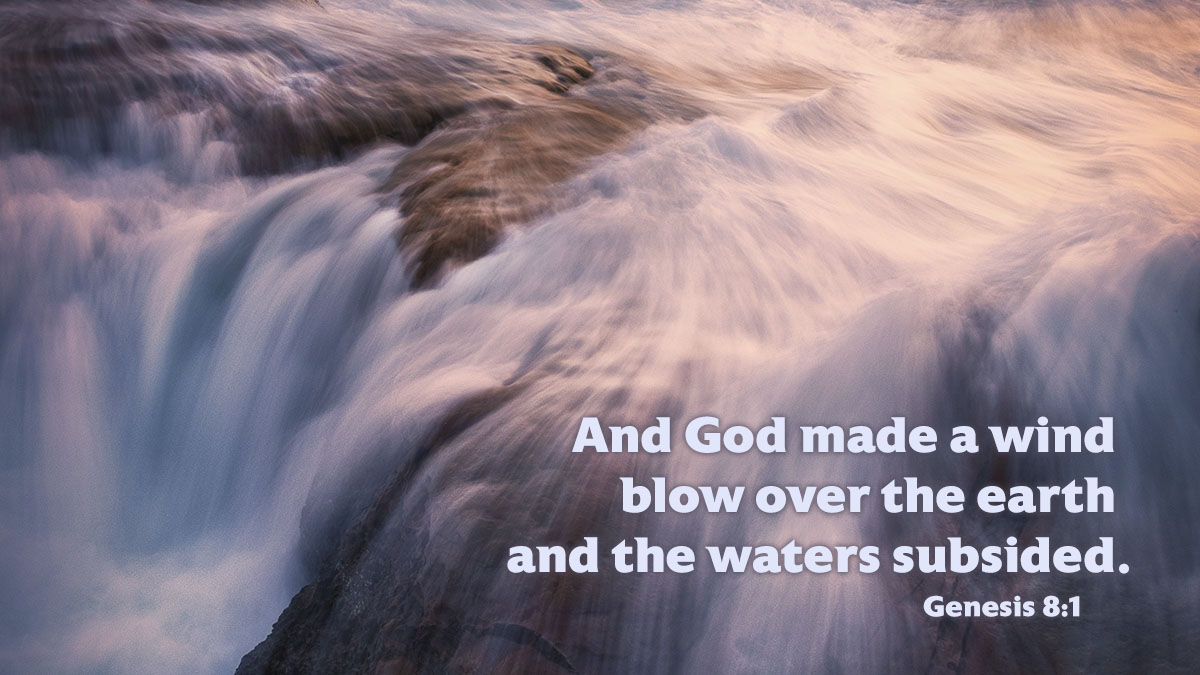 23 He blotted out every living thing that was upon the face of the ground, man and animals and creeping things and birds of the air; they were blotted out from the earth. Only Noah was left, and those that were with him in the ark. 24 And the waters prevailed upon the earth a hundred and fifty days. 8:1 But God remembered Noah and all the beasts and all the cattle that were with him in the ark. And God made a wind blow over the earth, and the waters subsided.

When that horrible wrath had exhausted itself, and all flesh and living things on the earth had been destroyed, the promise made by God to Noah and his sons, that they were to be the seed of the human race, began to be realized. No doubt this promise was to them an object of eager expectation. No life is so hedged about with difficulties as that of faith. This was the life lived by Noah and his sons, whom we see absolutely depending upon the heavens for support. The earth was covered with water. There was no bottom on which to stand. It was the word of promise that upheld them, as they drifted in this welter of waters.

The difficulty besetting Noah is hinted at in the words, “God remembered.” Moses thus intimates that Noah had been tossed on the water so long that God seemed to have forgotten him entirely. They who pass through such mental strain, when the rays of divine grace are gone and they sit in darkness or are forgotten by God, find by experience that it is far more difficult to live in the Word or by faith alone than to be a hermit or a monk. Hence it is not a meaningless expression when the Holy Spirit says that “God remembered Noah.” He means that from the day that Noah entered the ark, no word was spoken, nothing was revealed to him; that he saw no ray of divine grace shining, but merely clung to the promise which he had accepted, while the waters and waves raged as if God had certainly forgotten him.

The word “remembered” indicates that great sadness beset both man and beast during the entire time of the flood. It must have been by dint of great patience and extraordinary courage that Noah and the others bore this lapse from God’s memory, which is simply unbearable to the flesh without the Spirit, even in slight trials. True, God always remembers his own, even when he seems to have forgotten them; but Moses indicates that he remembered his people here in a visible way, by a sign, and by openly fulfilling what he had previously promised through the Word and the Spirit. This story sets before us an example of faith, of endurance and patience.

Luther, Martin, and John Sander. Devotional Readings from Luther’s Works for Every Day of the Year. Augustana Book Concern, 1915, pp. 283–84.