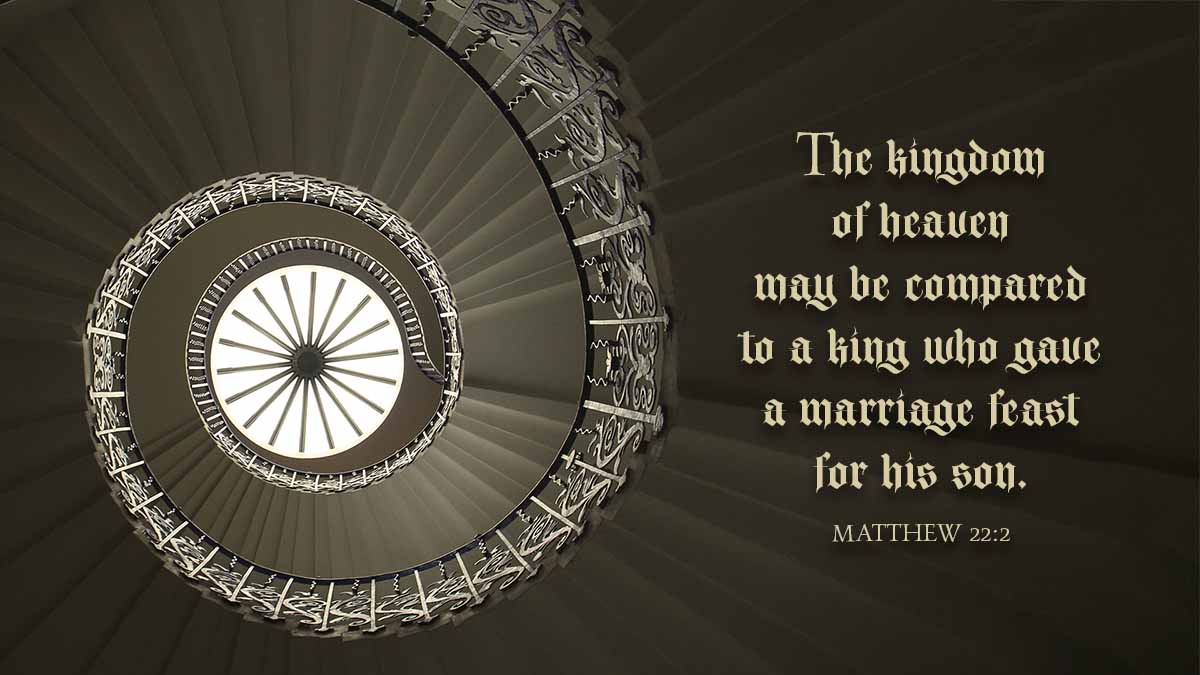 1 And again Jesus spoke to them in parables, saying, 2 “The kingdom of heaven may be compared to a king who gave a marriage feast for his son, 3 and sent his servants to call those who were invited to the marriage feast; but they would not come. 4 Again he sent other servants, saying, ‘Tell those who are invited, Behold, I have made ready my dinner, my oxen and my fat calves are killed, and everything is ready; come to the marriage feast.’ 5 But they made light of it and went off, one to his farm, another to his business, 6 while the rest seized his servants, treated them shamefully, and killed them. 7 The king was angry, and he sent his troops and destroyed those murderers and burned their city. 8 Then he said to his servants, ‘The wedding is ready, but those invited were not worthy. 9 Go therefore to the thoroughfares, and invite to the marriage feast as many as you find.’ 10 And those servants went out into the streets and gathered all whom they found, both bad and good; so the wedding hall was filled with guests. 11 “But when the king came in to look at the guests, he saw there a man who had no wedding garment; 12 and he said to him, ‘Friend, how did you get in here without a wedding garment?’ And he was speechless. 13 Then the king said to the attendants, ‘Bind him hand and foot, and cast him into the outer darkness; there men will weep and gnash their teeth.’ 14 For many are called, but few are chosen.”

The great love Christ has for us is presented to us in this picture of the marriage feast. There are many kinds of love, but none is so fervent as a bride’s love for her bridegroom and that of the bridegroom for his bride. True love has no regard for pleasures or presents, or riches or gold rings, but cares only for the bridegroom. Even if he gave her all he had, she would regard none of his presents, but would say: I will have only thee. And on the other hand if he has nothing at all, it makes no difference to her, she will in spite of all that desire him. This is the true nature of the love of a bride. But where she has regard to pleasure, she does not care for him, but for the money; such love does not last long.

This true bride-love God presents to us in Christ, in that he allowed him to become man for us and be united with our human nature that we might thus perceive and appreciate his good will toward us. As the bride loves her betrothed, so also does Christ love us; and we on our part will love him, if we believe and are the true bride. Although he gave us the wisdom of all the prophets, the glory of all the saints and angels, and even heaven, yet would we not esteem them unless he gave us himself. The bride can be satisfied with nothing; the only one thing she wants is the bridegroom himself. “My beloved is mine and I am his.”

So is Christ also disposed toward me; he will have me only and nothing besides. If I gave him all I could, it would be of no use to him; he would not regard it, if I wore all the hoods of all the monks. He wants my whole heart; the outward things, as the outward virtues, are only maid-servants, he wants the wife herself. He demands my heart. This marriage union is accomplished by faith, so that I rely fully and freely upon him, that he is mine. If I really have him, what more can I desire? If I am his and he is mine, I have eternal life, righteousness and all that belongs to him, so that neither death, sin, hell nor Satan can harm me.

Luther, Martin, and John Sander. Devotional Readings from Luther’s Works for Every Day of the Year. Augustana Book Concern, 1915, pp. 384–85.