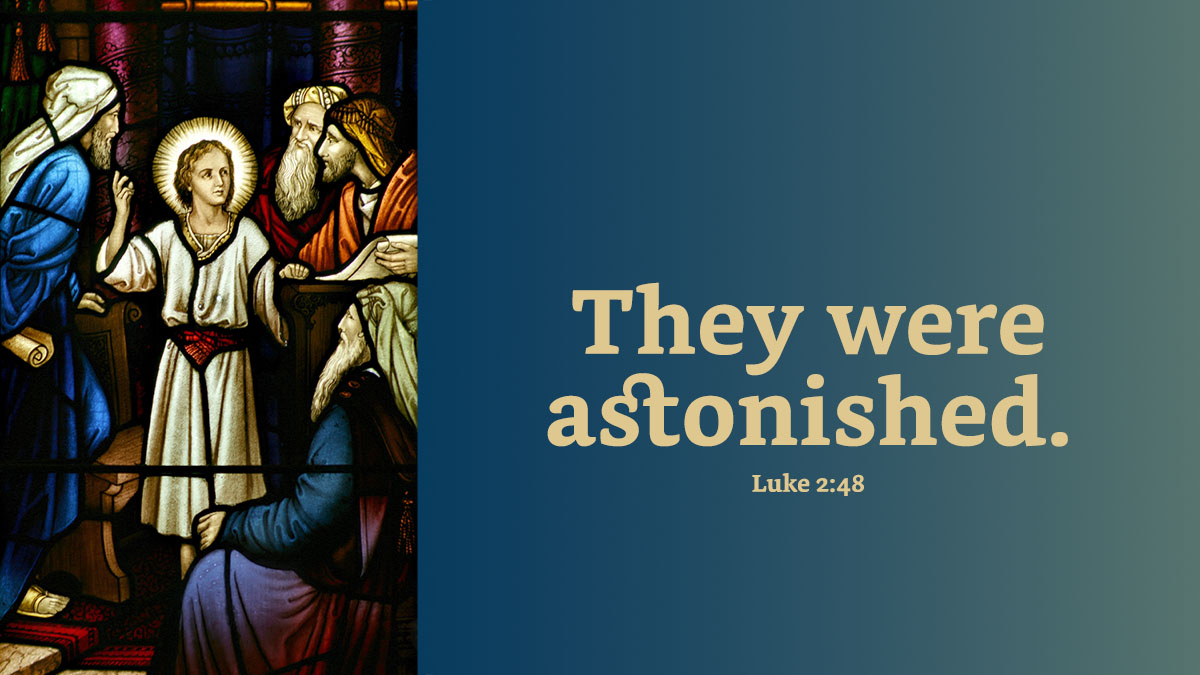 41 Now his parents went to Jerusalem every year at the feast of the Passover. 42 And when he was twelve years old, they went up according to custom; 43 and when the feast was ended, as they were returning, the boy Jesus stayed behind in Jerusalem. His parents did not know it, 44 but supposing him to be in the company they went a day’s journey, and they sought him among their kinsfolk and acquaintances; 45 and when they did not find him, they returned to Jerusalem, seeking him. 46 After three days they found him in the temple, sitting among the teachers, listening to them and asking them questions; 47 and all who heard him were amazed at his understanding and his answers. 48 And when they saw him they were astonished; and his mother said to him, “Son, why have you treated us so? Behold, your father and I have been looking for you anxiously.” 49 And he said to them, “How is it that you sought me? Did you not know that I must be in my Father’s house?” 50 And they did not understand the saying which he spoke to them. 51 And he went down with them and came to Nazareth, and was obedient to them; and his mother kept all these things in her heart.
52 And Jesus increased in wisdom and in stature, and in favor with God and man.

The holy Virgin was a real martyr for three days, and these days were harder for her than was the external pain of martyrdom to other saints. She had had such anxiety on her Son’s account that she could not have suffered any more bitter pain. For that is the greatest torture and woe, when the heart is attacked and tortured. That is only half-suffering when the body alone is afflicted, but when the heart is compelled to endure suffering, only great and noble spirits, with special grace and strength, are able to endure it. But why does God permit these afflictions to come upon his loved ones?

First, that he may guard his own against presumption; that great saints, who have received special grace and gifts from God, may not presume to depend upon themselves. For if they should at all times be strong in spirit and experience only joy and pleasure, they might finally fall into the fatal pride of the devil, which despises God and trusts in self. Thus God keeps them in humility, so that they do not become proud and carnally secure in regard to their faith and holiness, as Peter did, when he boasted his willingness to lay down his life for Christ.

Secondly, God permits his saints to suffer these trials as an example to others, to alarm the carnally secure and to comfort the timid and alarmed. The wicked and impenitent may learn from this how to amend their ways, keep themselves from sin, since they can see that God deals even with the saints in a way to produce anxiety. Such examples are intended to serve as a means of comfort to alarmed and anxious consciences, when they see that God has not only attacked them, but also the most exalted saints and permitted them to suffer the same trials and anxieties.

Thirdly, God does this that he may teach his saints to prepare themselves to find Christ and keep him. Mary and Joseph sought the child Jesus for three days without finding him either in Jerusalem or among their friends and acquaintances, until they came to the temple where he sat among the teachers and where the Scriptures and God’s Word are studied.