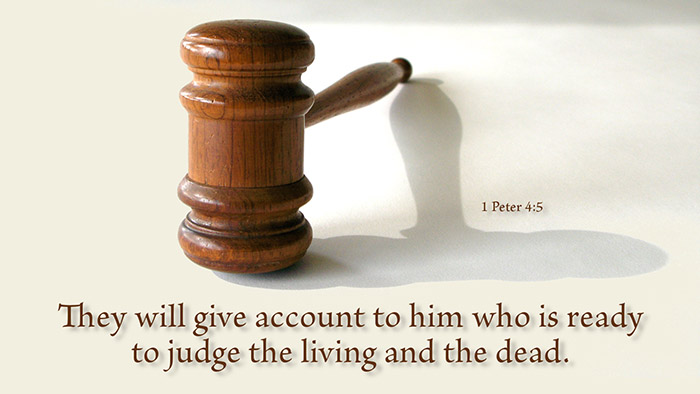 We confess that Jesus ascended to his Father and that as Lord of of heaven and earth, he is appointed to be the judge of both the living and the dead (Acts 10:42). When he returns from heaven on that Day, all will be required to give an account of their lives. Even the dead will be called to testify about their lives, whether they were righteous or not. Anyone who thinks about this should be terrified—but not the Christian.

Everyone who believes in Jesus receives forgiveness of sins through his name” (Acts 10:43). More than forgiveness, because of his mercy and grace, the righteous judge of all creation does not even charge our sins to us. He is just in his doing so because he has paid the debt of our sin and transferred his own blessed righteousness to our poor estates. He is both just and justifier of those who have faith in him (Romans 3:26).

Jesus is coming soon to judge all who have lived—whether they are alive or dead when he returns. The Christian should be careful to live faithfully but not trust in his own righteousness. Nor should she fear just because she is not the person she wants to be or imagines God wants her to be. Instead, she should trust that Christ's own righteousness is hers by faith. Though God will judge all, the Christian is clothed in Christ, and looks just like Jesus in the eyes of the judge.