From the Word: And she will give birth to a son, and you shall call his name Jesus, for it is he who will save his people from their sins. (Matthew 1:21)

Pulling It Together: The name “Jesus” is the Greek form of the Hebrew “Joshua” (which later morphed into “Jeshua”) which means “the Lord saves.” When we say that we believe in Jesus, we do not merely mean that we believe there was a person who once lived whose name was Jesus. We are declaring him to be the Savior of the world, the one who delivers us from our sins. This was the reason he was born into the world: to save us from sin (John 3:17).

When we say that we believe in Jesus, we are confessing that Jesus is the Savior, the deliverer of the world. Salvation comes in no other way (John 14:6) than through faith in him as deliverer. Though there are many who will not believe, he is their deliver nonetheless. C. S. Lewis wrote in his novel The Great Divorce, “There are only two kinds of people in the end: those who say to God, ‘Thy will be done,’ and those to whom God says, in the end, ‘Thy will be done.’”

When we confess our belief in Jesus, we are saying to God, “Thy will be done”; deliver us! 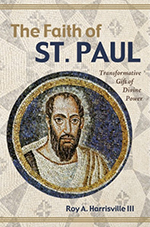 The Faith of St. Paul: Transformative Gift of Divine Power by Roy A. Harrisville III provides a fresh perspective on the letters of St. Paul by presenting the apostle's concept of faith as a transformative gift of divine power.