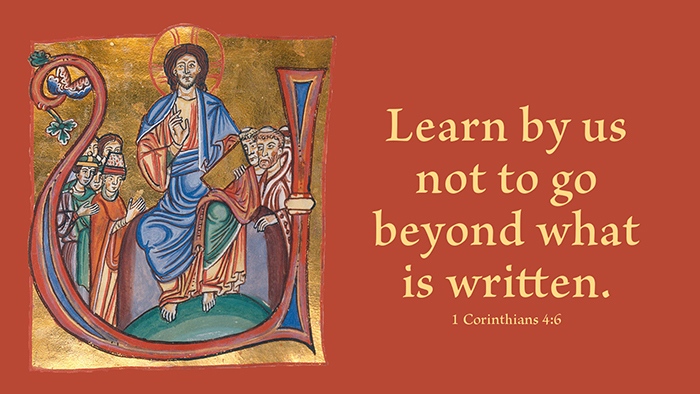 Although he is God and man, he is not divided, but is one Christ. He is united because God has taken humanity into himself; he does not transform deity into humanity. He is completely one in the unity of his person, without confusing his natures. For as the rational soul and body are one person, so the one Christ is God and man.

How can we begin to understand through human reasoning the dual nature of Christ? We cannot wrap our minds around it, though perhaps a little more easily than we can think on the Trinity itself. Jesus is man and divinity at once. This is what Scripture attests and we would do well to leave it there. So, what does the Word say? What is written?

The Son of God took human body but remained God. His divinity remained though he was clothed in flesh. He did not set aside his divinity to become a man for a time. He was and is both divine and human. He is forever God and man, sitting at the Father's right hand and reigning triumphant over sin and death. There is not a part of him that is human and another part that is God, as though he were oil and water in the same glass. His two natures are completely unified in the one person, Jesus Christ. Jesus is a whole person like us, having a body, soul, and spirit. Yet, at the same time, he is the divine Word of God, or Logos (John 1:1). He is not two beings, a god and a man somehow in a kind of symbiosis. Nor is he some kind of compound or complex organism, made by the joining of two beings, but no longer quite human or divine as a the result. We confess that he is God and man, undivided, one Christ.

Prayer: Fill me with your grace, O God, that throughout this day I may delight in your praise through Jesus Christ my Lord. Amen. 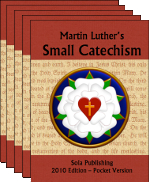 This edition of Luther's Small Catechism is specifically designed to go with the Sola Confirmation Series. The 2010 Sola/ReClaim Edition* is a faithful word-for-word translation from Luther's German Catechism. It also includes the section on the Office of the Keys, added later to Luther's Catechism.

This pocket edition features quotations from the English Standard Version (ESV) of Scripture, and the traditional ICET liturgical texts (as used in the Lutheran Book of Worship). The primary verses of Scripture, Creed, and Prayers are printed in italics; Luther’s explanations are printed in plain text. Luther’s explanations are formatted with a mid-sentence break, to highlight contrasting phrases and to aid in memorization.