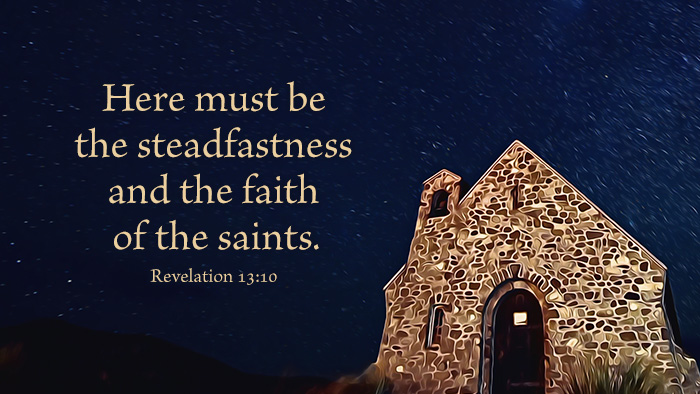 From the Word: 5 And the beast was given a mouth speaking incredible things and blasphemies; and it was permitted to exercise authority for forty-two months. 6 And it opened its mouth with profanities against God, to blaspheme his name and his tabernacle, those who dwell in heaven. 7 And it was allowed to make war on the saints, and to overcome them. It was granted authority over every tribe and people and tongue and nation, 8 and all who dwell on the earth will worship him, those whose name has not been written from the foundation of the world in the book of life of the Lamb who has been slain. 9 If anyone has an ear, let him hear: 10 If anyone is for captivity, into captivity he goes. If anyone kills with the sword, by the sword he must be killed. Here must be the steadfastness and the faith of the saints. (Revelation 13:5–10)

Let everyone come together, boasting of their many great, painful, and difficult works. We will see whether they can produce a single thing that is greater and nobler than obedience to father and mother, to whom God has appointed and commanded obedience next to his own majesty. If God’s Word and will are primary and are being observed, nothing should be esteemed higher than the will and word of one’s parents, so long as they too, are obedient to God and not opposed to the preceding commandments.

Pulling It Together: Those who depend upon their works instead of their hope and faith in the great work of Christ Jesus have already bowed to the beast. In doing so, they have knelt before the dragon who has waged and won his war by convincing them of their own religious powers. If anyone is to depend upon his religious devotion, to the worm he will go. This calls for the steadfast faith of Christ’s followers. We must depend upon him by believing his Word and keeping his commandments, no matter what the devil and his world throw at us. As has been said so often, this begins in the home where God has given us parents from whom to learn obedience to him.

Prayer: Help me to learn your lessons, Lord. Amen.