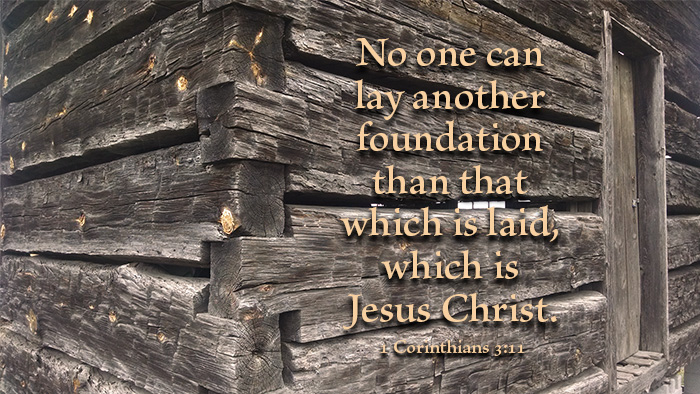 From the Word: 10 According to the grace of God given to me, like a wise, master builder, I laid a foundation; and another is building upon it. But let each one be careful how he builds upon it, 11 for no one can lay another foundation than that which is laid, which is Jesus Christ. (1 Corinthians 3:10–11)

Oh, what a high price would all the Carthusians, monks, and nuns pay, if in all their religious observances they could bring into God’s presence a single work done by obeying this commandment. They would then be able to face him and say with joyful hearts: “Now I know that this work is well pleasing to you.” Where will these poor, wretched persons hide when, in the sight of God and all the world, they must blush with shame before a young child who has lived according to this commandment, when they have to confess that with their whole life they are not worthy to give that child a drink of water? And it serves them right for their devilish distortion of God’s commandment, treading it under foot as they vainly afflict themselves with works of their own design. Moreover, they have only scorn and defeat for their reward.

Pulling It Together: “I will give up heating this year for God! He will respect me for that sacrifice and grant me entrance at heaven’s gates.” As some old friends of mine used to say mockingly, “Let me know how that works out for you.” When we invent religious schemes that have nothing to do with God’s will and command, we are, in fact, mocking him. Is not his word enough for us? Do we refuse to believe his promises? Is Christ an insufficient Savior? Let our life of faith begin with what the Lord commands and wills, and may we build upon it with more of the same. This is precisely what we should be doing in the home, starting our children off on the right foot by teaching them the commandments. If we do not, they are likely to invent some novel enthusiasm that is nothing more than the old bowing down to their own images.

Prayer: Lift our eyes to you, Lord, and save us from ourselves. Amen.