Everything that we have comes from God. Both our physical and spiritual lives are gifts. Since all comes from God, why would we think righteousness and eternal life come from another source? Why would we think ourselves or anyone else able to give such great gifts? Now we might make much of ourselves, of our religious devotion, our prayers to saints, our offerings and other sacrifices. Or we might make much of a saint’s life, and depend upon that saint to answer our prayers. We would do so because we recognize that our own lives are insufficient to earn such favor. So at least we would have understood that our own standing before God is affected because of the righteousness of someone else. But that someone—the only one—who can assign his own righteousness to us is Christ. We are made righteous because of his merits, not because of the saintly lives of any others. Our boast is not in ourselves or saints but in the Lord alone. He is our righteousness, holiness, and redemption.

Prayer: All praise belongs to you alone, Lord, who has accomplished our salvation. Amen. 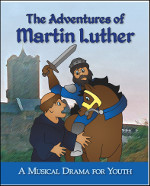