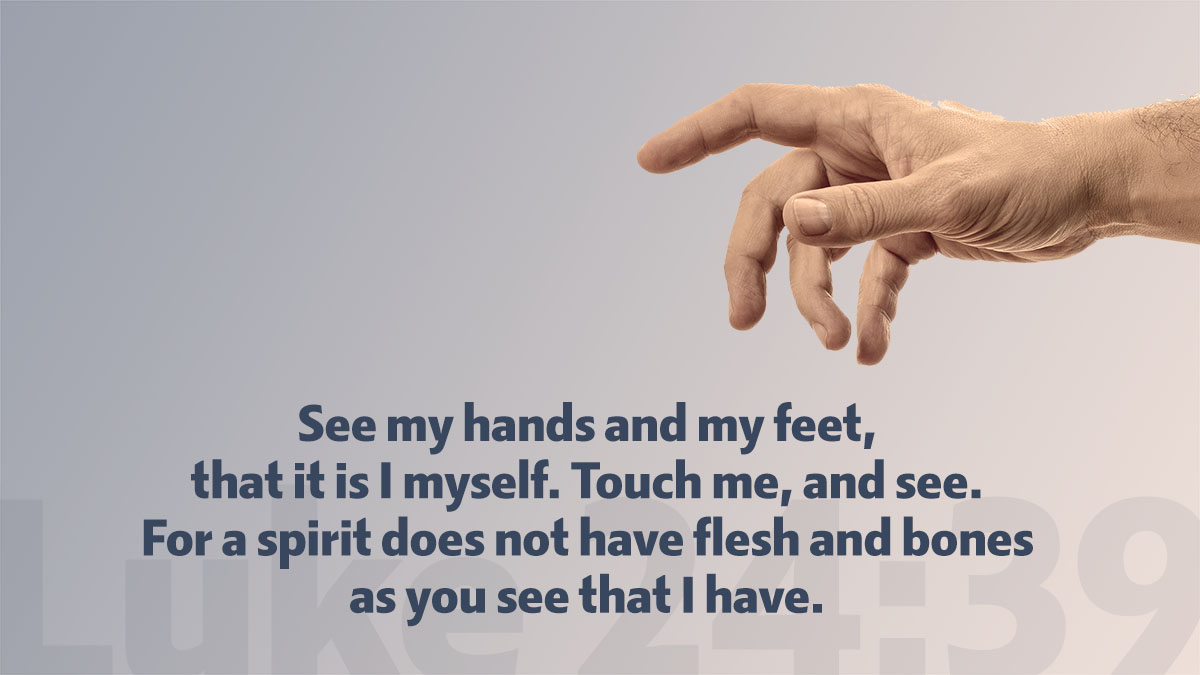 36 As they were saying this, Jesus himself stood among them. 37 But they were startled and frightened, and supposed that they saw a spirit. 38 And he said to them, “Why are you troubled, and why do questionings rise in your hearts? 39 See my hands and my feet, that it is I myself; handle me, and see; for a spirit has not flesh and bones as you see that I have.” 41 And while they still disbelieved for joy, and wondered, he said to them, “Have you anything here to eat?” 42 They gave him a piece of broiled fish, 43 and he took it and ate before them.

As the text gives occasion, we may here speak of ghosts, or walking spirits, for we see here that the Jews and the apostles themselves held that spirits roam about and are seen by night and at other times. But the Scriptures do not say, nor give any example, that such are the souls of dead persons walking among the people and seeking help, as in our blindness and delusion by the devil we have heretofore believed.

We have good reason not to believe such apparitions of roaming, erring spirits that profess to be souls. First, because the Scriptures nowhere say that the souls of the deceased that have not yet risen should wander about among the people; whereas everything else we need to know is clearly revealed in the Scriptures. Not one word of this is given for our instruction, nor is it possible that we should grasp and understand the state of the spirits that have departed from the body before the resurrection and the day of judgment; for they are sundered and separated altogether from the world and from this generation. Furthermore, it is clearly forbidden in the Scriptures to consult the dead or to believe them who do. God will neither let one rise from the dead, nor preach, because we have Moses and the prophets, or the Scriptures.

Know therefore that all ghosts and visions, which cause themselves to be seen and heard, especially with din and noise, are not men’s souls, but evidently devils that amuse themselves either to deceive the people with false claims and lies, or unnecessarily frighten and trouble them. A Christian should be well girded with God’s Word and faith, that he may not be deceived nor affrighted, but abide in the doctrine that he has learned and confessed from the gospel of Christ, and cheerfully despise the devil with his noise. Nor does he tarry long when he feels that a soul trusts in Christ and despises him.

Luther, Martin, and John Sander. Devotional Readings from Luther’s Works for Every Day of the Year. Augustana Book Concern, 1915, pp. 277–79.