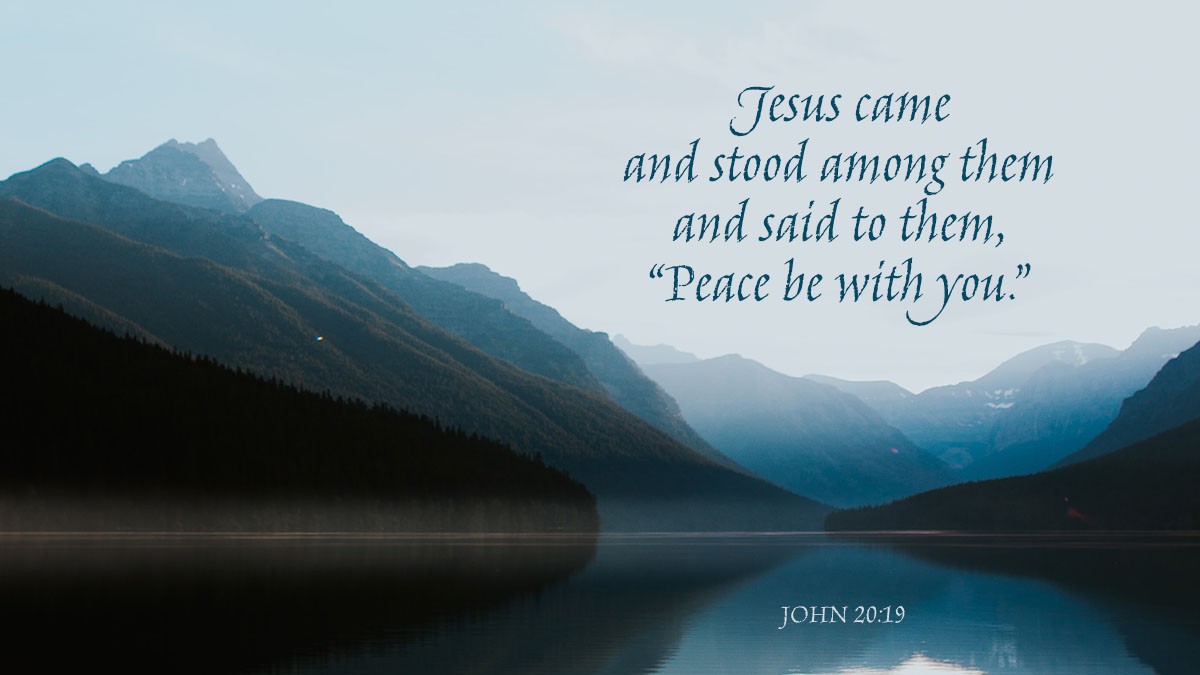 On the evening of that day, the first day of the week, the doors being shut where the disciples were, for fear of the Jews, Jesus came and stood among them and said to them, “Peace be with you.”

Jesus finds his disciples sitting in fear and terror both from without because of the Jews and from within because of their consciences. They were slow of heart to believe what they had heard from the women and from some of the disciples, that he had risen from the dead. While they were talking about it with sad hearts, Christ appears and hails them with his friendly greeting, “Peace be unto you,” which means a wish for everything that is good.

The peace of Christ is hidden from our eyes and senses and is different from that which the world seeks. It is not a visible or tangible peace, consisting of bodily feeling, but an inner and spiritual peace, consisting of faith, which grasps and holds to nothing save what it hears in our text, namely, the gracious words of Christ, which he speaks to all frightened and troubled souls. A Christian, therefore, is contented and satisfied with having Christ as his friend and in him a gracious God who desires his constant welfare, even though, materially speaking, he has no peace in the world, but constant strife and contention. At another place Jesus says, “These things have I spoken unto you, that ye might have peace. In the world ye have tribulation.”

The disciples were not troubled by any one, yet their hearts were all aflutter, and were neither at rest nor at peace. While they are thus in fear and terror, the Lord brings them peace, not by removing any danger, but by quieting their hearts. The wickedness of the Jews is neither removed nor changed; they are as full of hatred and rage as before. Without there is no change whatever, but the disciples are changed within; they have become courageous and bold, and the hatred of the Jews is now of little concern to them. This is the true peace which is able to calm the heart even in the midst of trouble. It is well called a peace “which passeth all understanding;” it is abiding and invincible as long as the heart clings to Christ; for thereby it is certain that it has a merciful God and the forgiveness of sins.

Luther, Martin, and John Sander. Devotional Readings from Luther’s Works for Every Day of the Year. Augustana Book Concern, 1915, pp. 138–39.