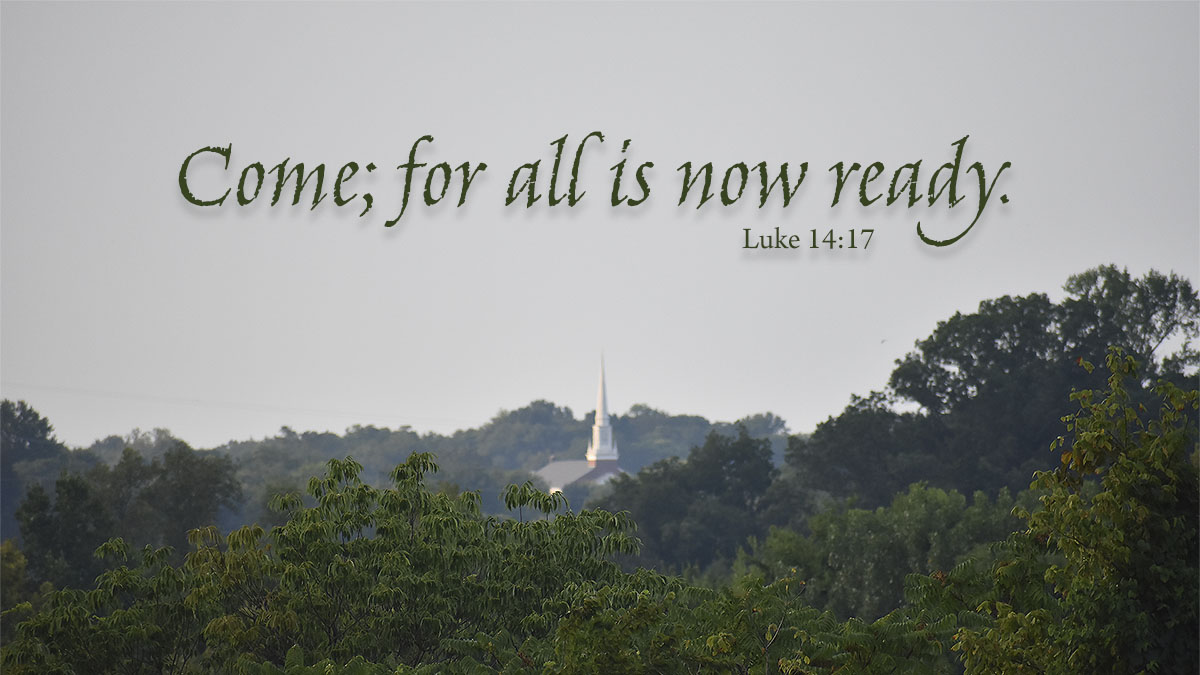 15 When one of those who sat at table with him heard this, he said to him, “Blessed is he who shall eat bread in the kingdom of God!” 16 But he said to him, “A man once gave a great banquet, and invited many; 17 and at the time for the banquet he sent his servant to say to those who had been invited, ‘Come; for all is now ready.’ 18 But they all alike began to make excuses. The first said to him, ‘I have bought a field, and I must go out and see it; I pray you, have me excused.’

The many who are bidden are the Jews and all the people of Israel, who from Abraham on, and especially through the prophets, had been invited. To the patriarch Abraham as the father of this people was this supper first announced. After that the prophets carried it further and directed the attention of the people to it, so that nothing was wanting on the part of the Lord our God, but all were diligently invited. When the hour came to go to the table, that is, when the time came for our Lord Christ to be born, to suffer and rise again from the dead, then the servants went out, John the Baptist and the apostles, and said to the people of Israel: Hitherto you have been invited, now is the time to come, now the supper is ready. Your Messiah is already born, has died, and is risen again, do not remain away any longer, come to the table, eat and be happy, that is, accept your promised treasure with joy, who has according to promise delivered you from the curse of sin and condemnation and has saved you.

The Jews excused themselves thus: We cannot accept the doctrine, for it is opposed to the priesthood and to the law, which God himself has given us through Moses. Besides, it also creates divisions in our kingdom which God has confirmed. We must see how to maintain our own affairs. Thus the first one excuses himself with his land, the second with his oxen, and both think they do well; the third does not even excuse himself at all, but simply says he cannot come.

These are the excuses of the Jews as well as our own, which we prefer against the gospel, for we are no better than they were. In the same manner our Papists excuse themselves and say: The doctrine is right of course, but we must still adhere to the Church and her orderly government. We must above all things maintain obedience to the worldly power, so that there be no disturbance and insurrection. But how will it end with them? Just as it did with the Jews. They held so long to their law, priesthood, kingdom and treasures, until they went to destruction and they lost one after the other. They desired not this supper, but preferred their priesthood to the gospel.

Luther, Martin, and John Sander. Devotional Readings from Luther’s Works for Every Day of the Year. Augustana Book Concern, 1915, pp. 258–59.