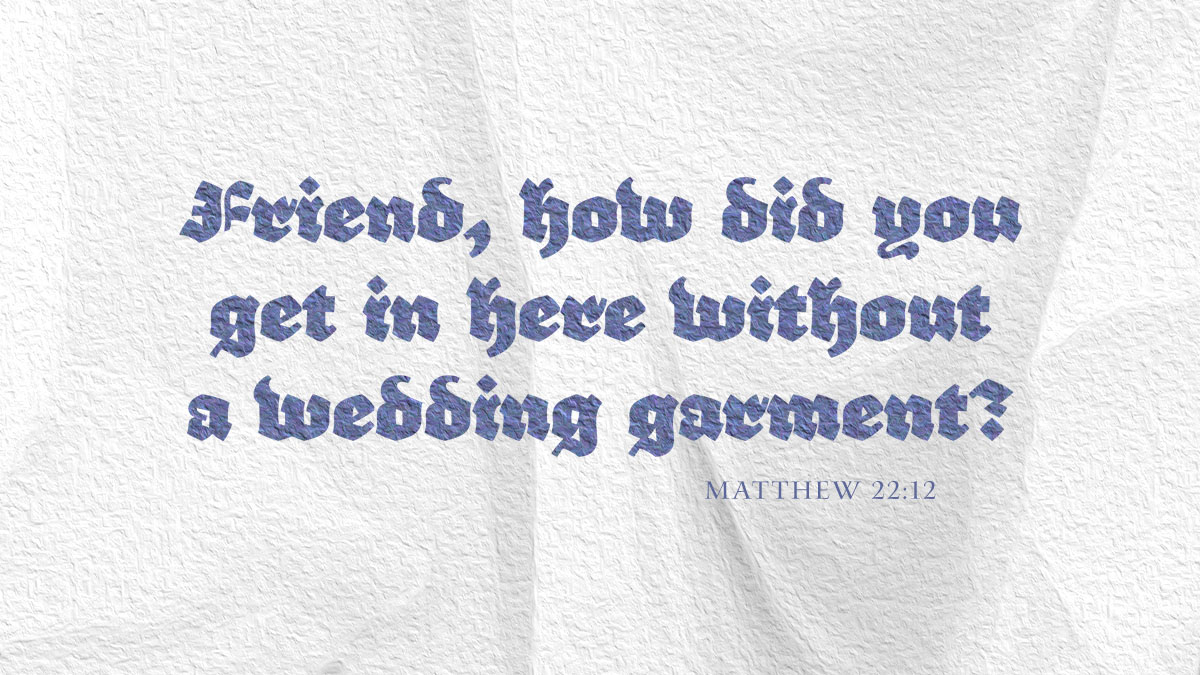 8 Then he said to his servants, ‘The wedding is ready, but those invited were not worthy. 9 Go therefore to the thoroughfares, and invite to the marriage feast as many as you find.’ 10 And those servants went out into the streets and gathered all whom they found, both bad and good; so the wedding hall was filled with guests.  11 “But when the king came in to look at the guests, he saw there a man who had no wedding garment; 12 and he said to him, ‘Friend, how did you get in here without a wedding garment?’ And he was speechless. 13 Then the king said to the attendants, ‘Bind him hand and foot, and cast him into the outer darkness; there men will weep and gnash their teeth.’ 14 For many are called, but few are chosen.”

Among the company sitting at table, there was also found a rogue, whom the king, in looking over the guests, speedily recognized to have on no wedding garment, and to have come, not in honor of the wedding, but disgracing the bridegroom and the lord who had invited him. These are such as permit themselves to be numbered among the Christians, hear the gospel, are in the outward communion of the right Church and act before the people as if they might also be of the gospel, but are not in earnest about it.

Such people the Christians must suffer in their gatherings and cannot prevent them from being amongst them; nor can they remove them, nor turn them out of their gatherings. They cannot judge and recognize them all, but must bear them and suffer their company until God himself comes with his judgment, so that they become manifest and betray themselves by their wicked life or false belief and spirit of heresy as not being true and honest Christians. So Paul says: “There must be also heresies among you, that they who are approved may be made manifest among you.” Thus the king comes in himself and makes manifest him who has not on the wedding garment.

It is easy to understand what is meant by this man’s being without a wedding garment, namely, without the new adornment in which we please God, which is faith in Christ, and therefore also without truly good works. He remains in the old rags and tatters of his own fleshly conceit, unbelief and security, without penitence and without understanding his own misery. He does not from the heart seek comfort in the grace of Christ, nor better his life by it, and looks for nothing more in the gospel than what his flesh covets. This wedding garment is the new light of the heart, kindled in it by the knowledge of the graciousness of this bridegroom and his wedding feast, which takes place especially through faith, by which the heart is renewed and purified. Where there is no faith, there the Holy Ghost is not, nor such fruits as please God. Whosoever does not know Christ through faith will also care little for God’s Word, nor think of living in accordance with it. He remains proud and insolent, but weeping and gnashing of teeth come soon enough.

Luther, Martin, and John Sander. Devotional Readings from Luther’s Works for Every Day of the Year. Augustana Book Concern, 1915, pp. 388–89.