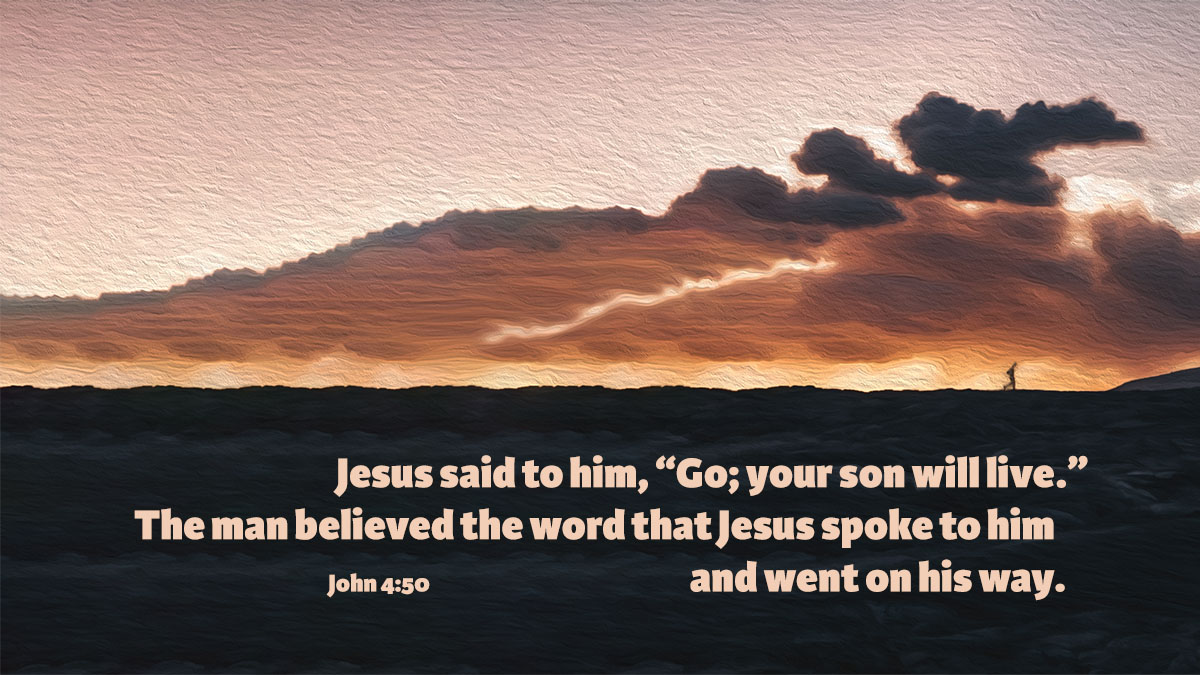 46 So he came again to Cana in Galilee, where he had made the water wine. And at Caperna-um there was an official whose son was ill. 47 When he heard that Jesus had come from Judea to Galilee, he went and begged him to come down and heal his son, for he was at the point of death. 48 Jesus therefore said to him, “Unless you see signs and wonders you will not believe.” 49 The official said to him, “Sir, come down before my child dies.” 50 Jesus said to him, “Go; your son will live.” The man believed the word that Jesus spoke to him and went his way.

The nobleman must have had faith, else he would not have asked the Lord to come to his son. He believed that if Christ would come to his house, he could heal his son; but unless he were present, he could not effect the cure. His faith was not strong enough to realize that Christ could heal without being present. Hence, his faith had to attain a higher stage. When Christ said, “Except ye see signs and wonders, ye will not believe,” his faith drooped and he feared lest Christ would refuse to help him. The earthen vessel was shattered and he thought his son had to die. But Christ approached, raised him up, and placed him on a higher plane of faith. “Go thy way; thy son liveth.” Thus the man advanced from his first faith, when he believed that Christ could heal if he were present, to a higher stage of faith, by reason of which he now believed the mere Word of Christ. For if he had not believed the Word, he would not have ceased until the Lord had accompanied him to his house; but he accepted the Word, believed Christ and clung to his Word.

This is a pure and strong faith, that requires the individual to cast away all sense, understanding and reason, and sink himself into one little word, be satisfied with it and feel secure in it. Reason would have led him to say: When I left my son, he was ill. As I left him so shall I find him. But faith says the contrary, abides firmly by the Word and is immersed in it; it does not at all doubt that it shall be as the Word declares. The father accepted the word of Christ, “Go thy way; thy son liveth,” and so he said in his heart: My son is ill, but I shall find him well. This was faith over against reason and experience. Thus faith does not remain idle or quiet, but progresses and rises higher.

So Christ also deals with us and permits us to be tried to strengthen our faith. If at the close of our lives we shall have a spark of such faith, it will be well with us. It matters not how insignificant faith may be, the power lies in seeing that it be not overthrown.

Luther, Martin, and John Sander. Devotional Readings from Luther’s Works for Every Day of the Year. Augustana Book Concern, 1915, pp. 393–94.