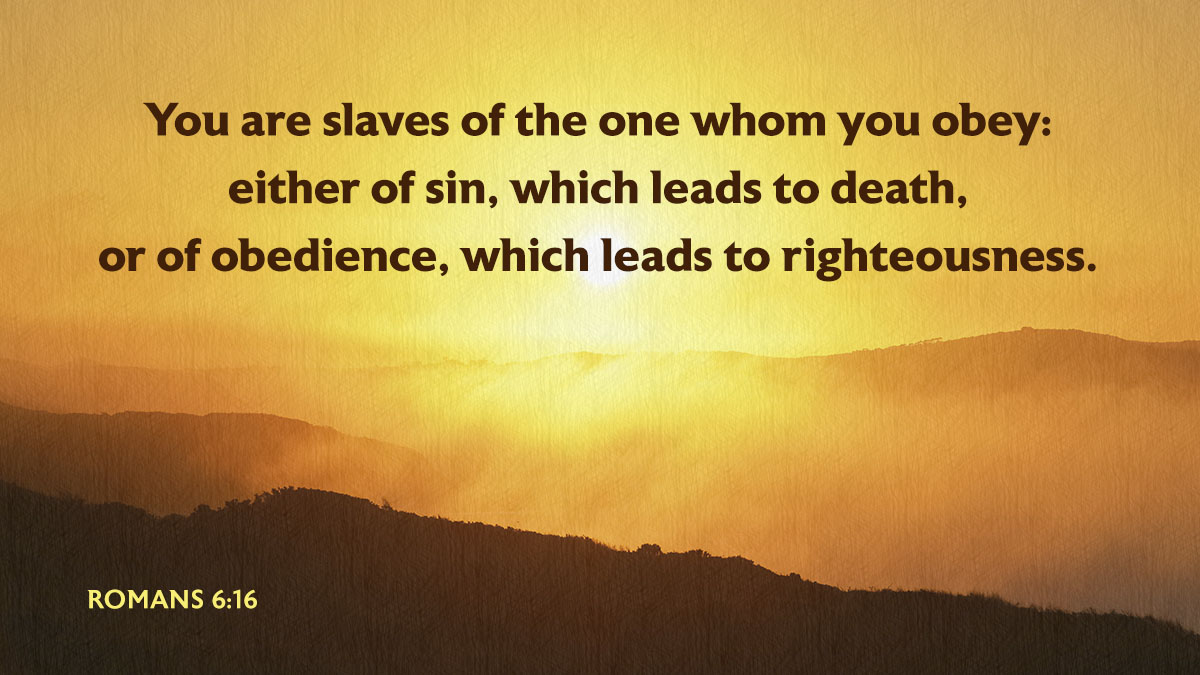 15 What then? Are we to sin because we are not under law but under grace? By no means! 16 Do you not know that if you yield yourselves to any one as obedient slaves, you are slaves of the one whom you obey, either of sin, which leads to death, or of obedience, which leads to righteousness?

Necessarily your life must be obedient to some master. Either you obey sin, to continue in the service of which brings death and God’s wrath, or you obey God in grace unto a new manner of life. Reason teaches, through the law, good works and forbids evil, but it is unable to comprehend why its teachings are not fulfilled. It perceives, from the results which follow disrespect for the law, that it is best to honor it, that it is right and praiseworthy not to steal and commit crime. But it fails to understand why, after its teachings are given, they are not naturally fulfilled. With sword, rack and gallows the judge may restrain public crime, but he cannot punish more than what is known and witnessed to before court. Whatever is done secretly and does not come before him, he cannot punish or restain.

The Word of God, however, teaches how to crush the head of the serpent and to slay the evil, so that judge and executioner are no longer necessary. It tells us that a Christian has certain knowledge that through the grace of Christ his sins are forgiven, blotted out and deprived of condemning power. Because he has obtained and believes in such grace, he receives a heart abhorrent of sin. Although feeling within himself the presence of evil thoughts and lusts, yet his faith and the Holy Spirit are with him to remind him of his baptism. He says: Although time and opportunity permit me to do evil and I run no risk of being detected and punished, I will not do it, but will obey God and honor Christ my Lord, for I am baptized into Christ and as a Christian am dead unto sin, nor will I come again under its power.

So acted godly Joseph, who, when tempted by his master’s wife, “left his garment in her hand, fled and got him out.” He was but flesh and blood and naturally not insensible to her inducement, to the time and opportunity, to the friendship of the woman. But he restrained himself, not yielding even in thought to the temptation. Such obedience to God destroys, indeed, the source of sin and evil.

Luther, Martin, and John Sander. Devotional Readings from Luther’s Works for Every Day of the Year. Augustana Book Concern, 1915, pp. 274–75.