The Gentle Rebuke of the Greatest Sin
Scripture and a reading from Lutherâs sermons and devotional writings
Pastor Mark Ryman - April 27, 2022 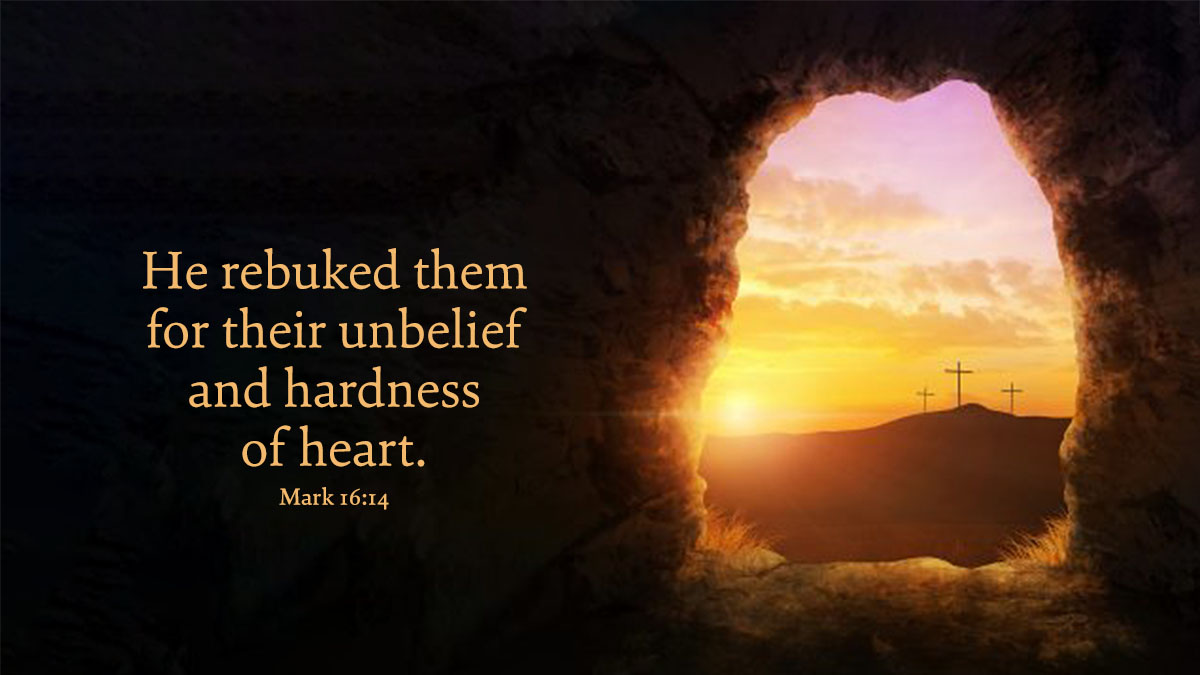 9 Now when he rose early on the first day of the week, he appeared first to Mary Magdalene, from whom he had cast out seven demons. 10 She went and told those who had been with him, as they mourned and wept. 11 But when they heard that he was alive and had been seen by her, they would not believe it. 12 After this he appeared in another form to two of them, as they were walking into the country. 13 And they went back and told the rest, but they did not believe them. 14 Afterward he appeared to the eleven themselves as they sat at table; and he upbraided them for their unbelief and hardness of heart, because they had not believed those who saw him after he had risen.

Christ upbraids the disciples with their unbelief and hardness of heart. He does not reject them, nor deal too severely with them, but reproves them. It is not an insignificant matter that the Lord rebuked his disciples; for unbelief is the greatest sin that can be named. Christ tells them the cause of their unbelief when he says that their hearts are hardened, still he deals mildly and gently with them. This is told us for our comfort, lest we despair, when, lacking in faith, we doubt, stumble and fall. It is to help us to rise again, to strengthen our faith and lift up our hearts to God, that we may grasp and hold fast the confidence of God, who does not deal severely with us, but can indeed bear with us and overlook much. If we believe him to be a merciful God, he will be found merciful and thus shows himself to us; but a bad conscience and an unbelieving heart have no such trust in God, but flee from him. So should we also deal with our neighbor. If we see him fall from the faith, or err and sin, we should not strengthen him in his wickedness, nor justify his cause, but admonish him and in meekness reprove his faults, yet not hold enmity, nor turn our love from him.

But let no one think that the apostles were altogether unbelieving; they believed what was written in the law and the prophets. There was a faith there, but they did not yet believe all things. Faith is a thing that always grows. Therefore the Lord shows wherein they lacked in faith; it was that they did not believe the resurrection of Christ from the dead. I hold that they believed that they had a gracious God, but this was not enough; they must believe also the resurrection of Christ. Thus the Lord upbraided them with their unbelief and said that in spite of all they had seen, they were not believing, they still lacked a certain article of faith, that on the resurrection. We should therefore expose and reprove what is wrong, but exercise truth and love toward everybody. We see that even the apostles were lacking in the chief things, yet they were corner stones, the foundation and the very best part of Christendom.

Luther, Martin, and John Sander. Devotional Readings from Luther’s Works for Every Day of the Year. Augustana Book Concern, 1915, pp. 153–54.