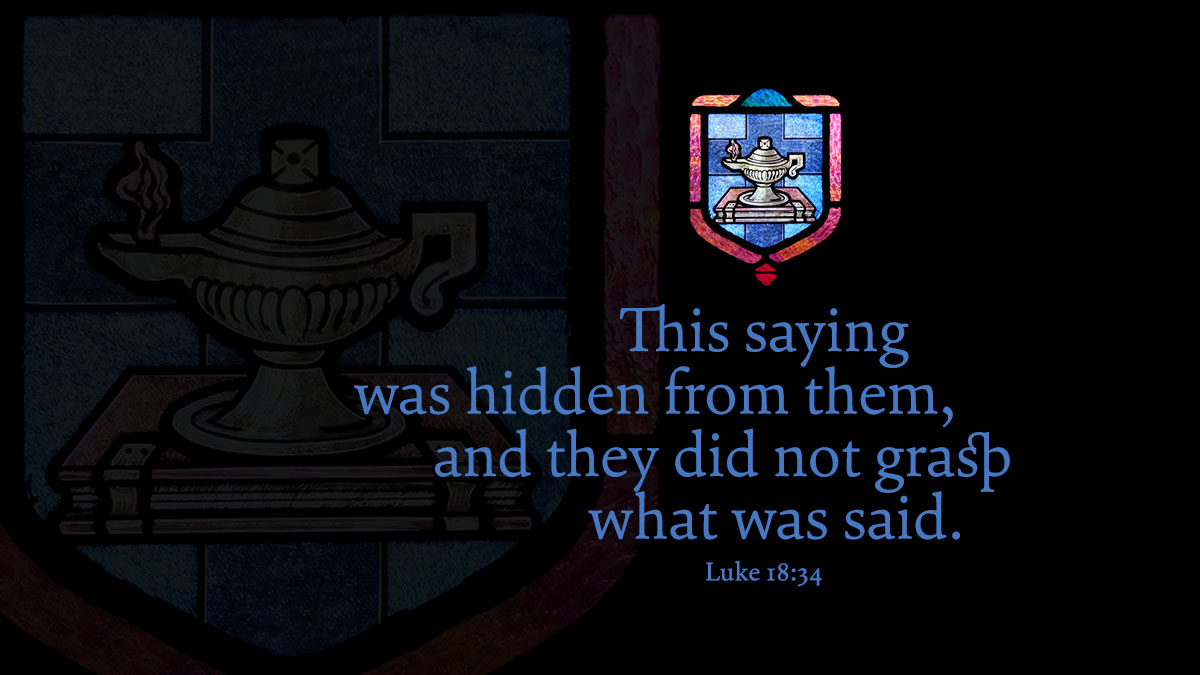 31 And taking the twelve, he said to them, “Behold, we are going up to Jerusalem, and everything that is written of the Son of man by the prophets will be accomplished. 32 For he will be delivered to the Gentiles, and will be mocked and shamefully treated and spit upon; 33 they will scourge him and kill him, and on the third day he will rise.” 34 But they understood none of these things; this saying was hid from them, and they did not grasp what was said.

The disciples “understood none of these things.” That is as much as to say: Reason, flesh and blood, cannot understand, nor grasp that the Scriptures should say how the Son of man must be crucified; much less does reason understand that this is Christ’s will and that he does it cheerfully; for it does not believe that it is necessary for him to suffer for us; it will deal directly with God through its own good works. God must reveal it in their hearts by his Spirit more than is proclaimed by words into their ears. Even those to whom the Spirit reveals it in their hearts believe it with difficulty and must struggle with it. Such a great and wonderful thing it is that the Son of man died the death of the cross willingly and cheerfully to fulfil the Scriptures for our welfare; it is a mystery and remains a mystery.

From this it follows how foolish they act who teach that the people should patiently bear their sufferings and death to atone for their sins and obtain grace, and pretend that if they suffer willingly all their sins will be forgiven them. Such persons only mislead the people, for they bury out of sight Christ and his death, upon whom our comfort is founded, and bring the people to a false confidence in their own suffering and death. This is the worst of all things a man can experience at the end of his life, and by it he is led direct into perdition. But learn to say: Whose death! Whose patience! My death is nothing. Christ’s suffering is my consolation, upon it I rely for the forgiveness of my sins; but my own death I will suffer to the praise and honor of my God freely and gratuitously, and for the advantage and profit of my neighbor, and in no way whatever depend upon it to avail anything in my own behalf before God.

As Christ now offered himself for us, we should also follow the example of love, and offer ourselves for the welfare of our neighbor, with all we have. We have spoken sufficiently on other occasions that Christ is to be preached in these two ways; but it is talk that no one desires to understand, for “the natural man receiveth not the things of the Spirit.”

Luther, Martin, and John Sander. Devotional Readings from Luther’s Works for Every Day of the Year. Augustana Book Concern, 1915, pp. 64–65.