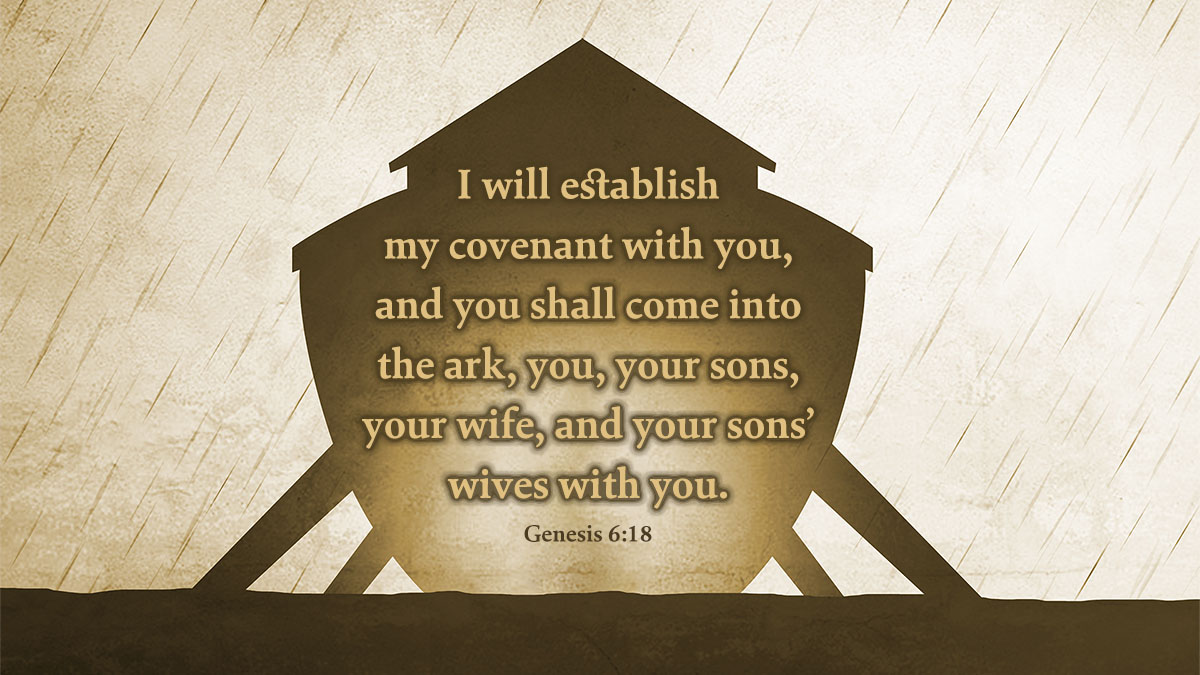 17 For behold, I will bring a flood of waters upon the earth, to destroy all flesh in which is the breath of life from under heaven; everything that is on the earth shall die. 18 But I will establish my covenant with you; and you shall come into the ark, you, your sons, your wife, and your sons’ wives with you.

Interpreters discuss what that covenant was. Lyra explains it as the promise to defend him against evil men who had threatened to murder him. Burgensis claims this covenant refers to the perils amid the waters, which were to be warded off. Still others believe it was the covenant of the rainbow, which the Lord made with Noah. In my opinion he speaks of a spiritual covenant, or of the promise of the seed which was to bruise the serpent’s head. The giants had this covenant, but when its abuse resulted in pride and wickedness, they fell from it. So it was afterward with the Jews, whose carnal presumption in reference to God, the law, worship and temple led to their loss of these gifts, and they perished. To Noah, however, God confirms this covenant by certainly declaring that Christ was to be born from his posterity and that God would leave, amid such great wrath, a nursery for the Church. This covenant not only includes protection of Noah’s body, the view advocated by Lyra and Burgensis, but also eternal life.

He plainly states “with thee.” He mentions not the sons, nor the wives, whom he was also to save, but he mentions Noah alone, from whom the promise was transmitted to his son Shem. This is the second promise of Christ, which is taken from all other descendants of Adam and committed to Noah alone. Afterward this promise is made clearer from time to time. It proceeded from the race to the family, and from the family to the individual. From the race of Abraham it was carried forward to David alone; from David to Nathan; from Nathan down to one virgin, Mary, who was the dead branch or root of Jesse, and in whom this covenant finds its termination and fulfilment. The establishment of such a covenant was most necessary in view of the imminence of the incredible and incalculable wrath of God.

It was no easy matter to believe that the whole human race was to perish. The world consequently judged Noah to be a dolt for believing such things and ridiculed him. In order to strengthen his mind amid such offenses God speaks with him often, and now even reminds him of his covenant.

Luther, Martin, and John Sander. Devotional Readings from Luther’s Works for Every Day of the Year. Augustana Book Concern, 1915, pp. 406–07.