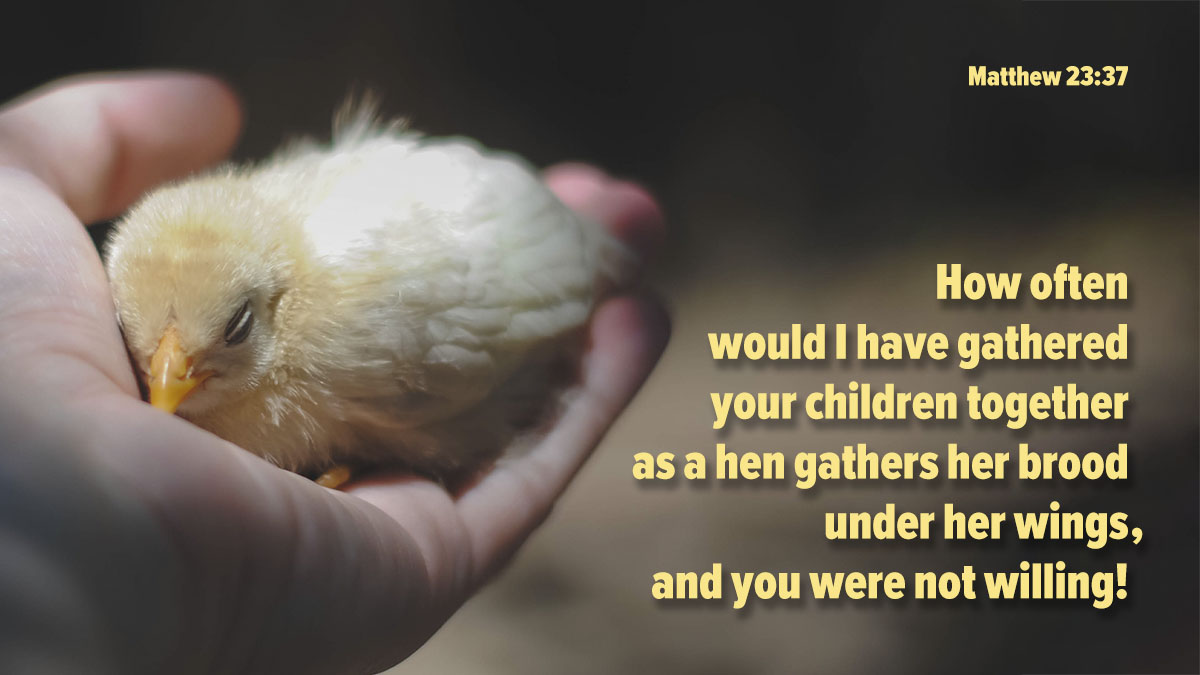 “O Jerusalem, Jerusalem, killing the prophets and stoning those who are sent to you! How often would I have gathered your children together as a hen gathers her brood under her wings, and you would not!

The Lord has given us here a lovely picture and parable of what he does for the sake of faith and believers, so that I do not know of a more beautiful passage in all the Scriptures. The Lord here emphasizes his good will and favor to the Jews and says he would gladly be their mother hen, had they wished to be his little chickens. O man! In this picture you will see how you are to conduct yourself towards Christ, and to what end he is to benefit you, how you should make use of him and enjoy him.

It is certain that our souls are the chickens, and Satan and wicked spirits are the buzzards in the air, with only this exception that we are not as wise as the chickens which flee to the hen; while the spirits of Satan are more subtle to rob us of our souls than the buzzards are to steal the chickens. Faith, if it is true faith, is of such a nature that it does not rely upon itself, but holds to Christ, and takes refuge under his righteousness; he lets this righteousness be its shield and protection, just like the little chicken never trusts in its own efforts, but takes refuge under the body and wings of the hen.

It is not sufficient for one who is to stand before the judgment of God to say, I believe and have grace; for all that is within him is not able to protect him; but he proffers to this judgment Christ’s righteousness which he permits to plead for him at the judgment seat of God. Under this righteousness he creeps, crouches and stoops, he confides in it and believes without doubt that he will be sustained by that same faith, not for his sake, nor for the sake of such faith, but for the sake of Christ and his righteousness under which he takes refuge. A faith that does not do this is not true faith. Thus also the Psalmist says, “He that dwelleth in the secret place of the Most High shall abide under the shadow of the Almighty. He is my refuge and my fortress. He shall cover thee with his feathers, and under his wings shalt thou trust.”

Luther, Martin, and John Sander. Devotional Readings from Luther’s Works for Every Day of the Year. Augustana Book Concern, 1915, pp. 242–43.