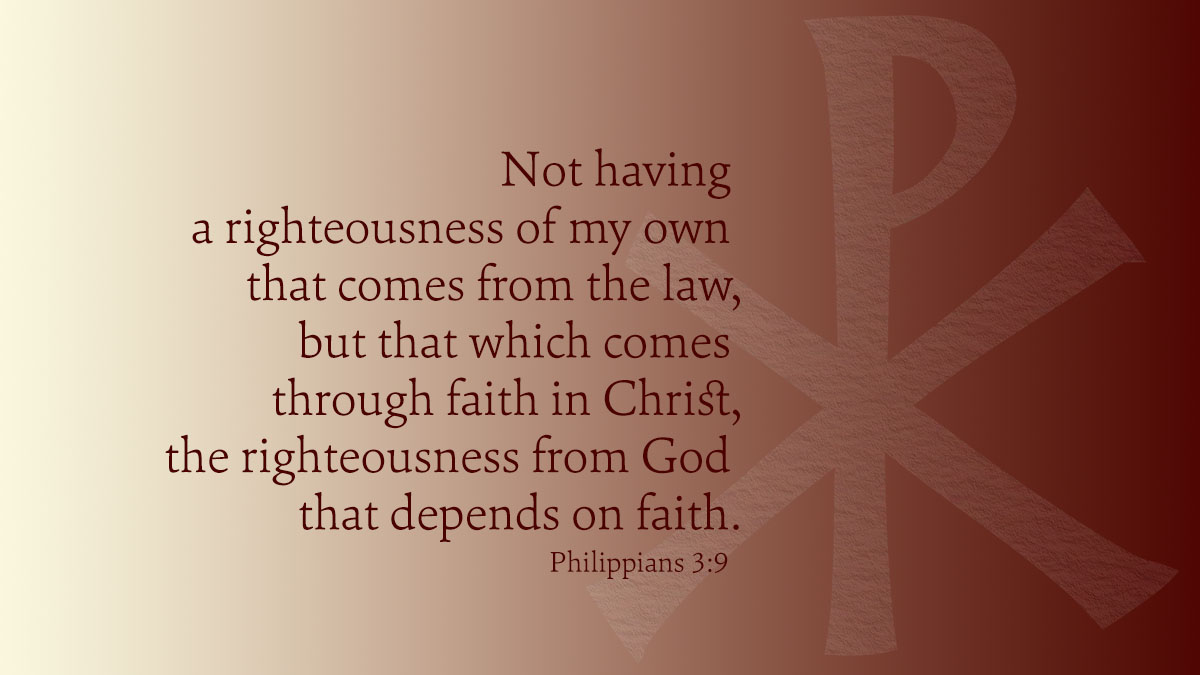 7 But whatever gain I had, I counted as loss for the sake of Christ. 8 Indeed I count everything as loss because of the surpassing worth of knowing Christ Jesus my Lord. For his sake I have suffered the loss of all things, and count them as refuse, in order that I may gain Christ 9 and be found in him, not having a righteousness of my own, based on law, but that which is through faith in Christ, the righteousness from God that depends on faith

As far as the righteousness of the law is concerned, Paul dares to say that he regards it as filth and refuse; notwithstanding in its beautiful and blameless form it is unsurpassed by anything in the world. Only the righteousness of faith teaches us how to apprehend God — how confidently to console ourselves with his grace and await a future life, expecting to approach Christ in the resurrection. By “approaching” him we mean to meet him in death and at the judgment day without terror, not fleeing, but gladly drawing near and hailing him with joy as the one awaited with intense longing.

Now, the righteousness of the law cannot effect such confidence of mind. Hence, for me it avails nothing before God. What does avail is God’s imputation of righteousness for Christ’s sake through faith. God declares to us in his Word that the believer in his Son shall, for Christ’s sake, have God’s grace and eternal life. He who knows this is able to wait in hope for the last day, having no fear, no disposition to flee.

But is it not treating the righteousness of the law with irreverence and contempt to regard it as something not only useless, but loathsome and abominable? Should we not condemn as a heretic this preacher who goes beyond his prerogative and dares find fault with the law of God? Paul would say: I, too, was such a one. In my most perfect righteousness of the law I was an enemy and persecutor of the Church of Christ. It was the legitimate fruit of my righteousness that I thought I must be a party to the most horrible persecution of Christ and his Christians. Thus my holiness made me an actual enemy of Christ and a murderer of his followers.

Whence such a disposition? It naturally springs from human righteousness. Every individual who professes human righteousness, and knows nothing of Christ, holds that righteousness efficacious before God. He relies upon it and gratifies himself with it, presuming thereby to present a flattering appearance in God’s sight and to render himself especially acceptable to him. His enmity is greater and his hatred more bitter toward the preaching that dares to censure such righteousness and assert its futility to merit God’s grace and eternal life.

Luther, Martin, and John Sander. Devotional Readings from Luther’s Works for Every Day of the Year. Augustana Book Concern, 1915, pp. 402–03.