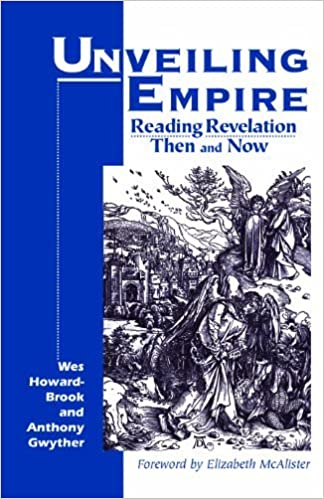 Reading Revelation Then and Now

by Wes Howard-Brook and Anthony Gwyther

"Superb both in its historical study of the antecedents and contexts of the Book of Revelation and its analysis of our own contemporary preoccupation with apocalyptic... Unveiling Empire maintains a sharp edge of critical discipline and obedience that belongs to the truth of the gospel." -- Walter Brueggemann

Confused by "end of the world" readings or put off by the dense and mysterious imagery, many readers hesitate to explore the Book of Revelation. Unveiling Empire offers a new entree into this troubling and controversial book of the Bible by examining the roots and social purposes of apocalyptic literature and Revelations own use of traditional imagery. In this way the authors provide readers with the tools for deciphering the texts message--and its urgent applications for Christians today living amidst a new kind of "empire."

Following a career as an attorney in public service, Wes Howard-Brook now teaches at Seattle University and offers presentations and workshops worldwide. His other books include Come Out, My People! God's Call Out of Empire in the Bible and Beyond and The Church Before Christianity. Activist Anthony Gwyther holds a masters from Sidney (Australia) College of Divinity, and has worked at the Brisbane Catholic Worker commnity and participated in the Mamre Community for disabled people and their families.