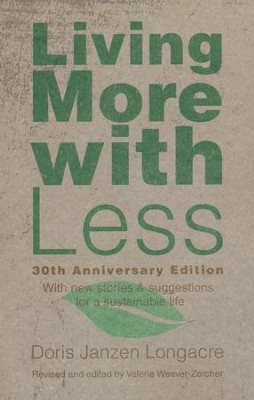 In 1980, before living simply and green became trendy and popular, Doris Janzen Longacre, author of the enormously popular More-with-Less Cookbook (over 900,000 sold), wrote Living More with Less, a practical guide for living in simple, sustainable, and healthy ways--ways that keep the future of the planet, and the plight of poor people, in mind.

Thirty years later, Living More with Less 30th Anniversary Edition is being released as a way to celebrate and honor Longacre's foresight and vision, and to pass on her vision for simple and sustainable living to a new generation. Revised and updated by Valerie Weaver-Zercher, this 30th anniversary edition is true to Doris Janzen Longacre's spirit of living in ways that keeps poor people, God's creation and each other in mind--and is loaded with new and practical tips in areas such as money, travel, clothing, housing, celebrations and recreation