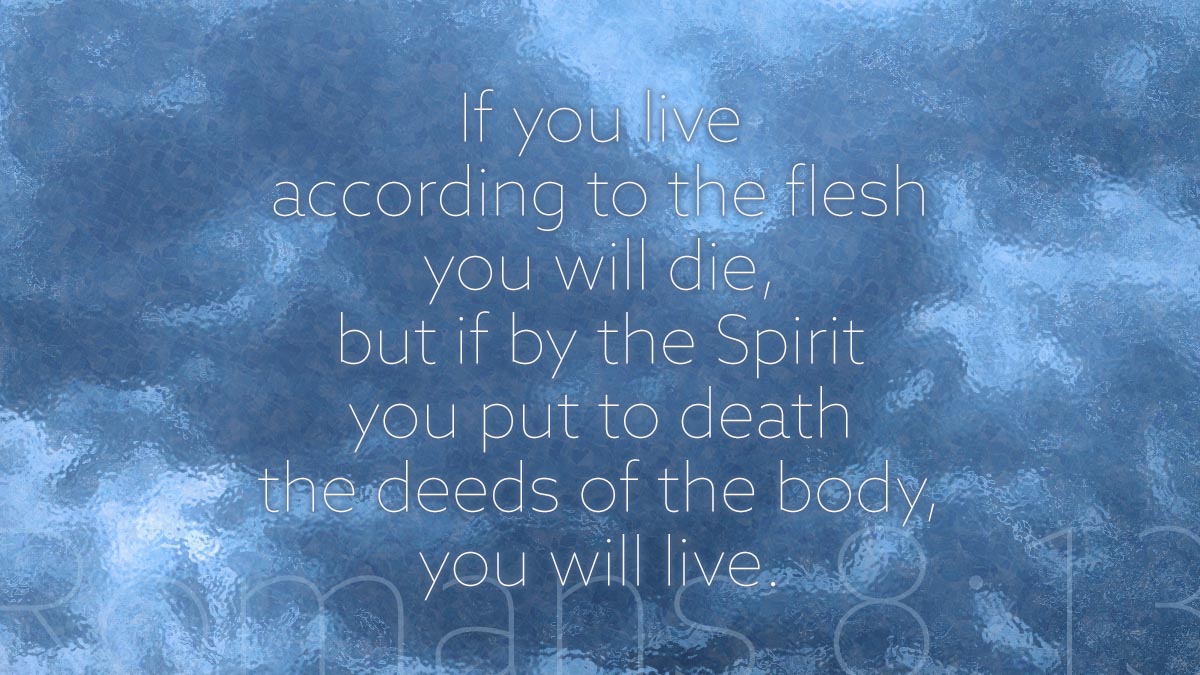 Here the apostle confesses that even in the Christian there is a remnant of the flesh, that must be put to death — all manner of temptation and lusts in opposition to God’s commandments. These are active in the flesh and prompt to sin. They are here called the “deeds of the body.” Of this nature are thoughts of unbelief and distrust, coldness and indolence with respect to God’s Word and prayer, carnal security and presumption instead of the fear of God, impatience and murmurings under suffering, anger and vindictiveness, or envy and hatred against our neighbor, avarice, unchastity and the like. Such inclinations as these dwell in flesh and blood and cease not to move and tempt man. Because of human infirmity they at times overtake him when he is not careful enough about transgression. They will surely overpower him unless he resolutely opposes them, and puts to death these “deeds of the body.” To do this means a severe struggle, a battle, which never abates, nor ceases as long as we live. The Christian dare never become slothful or negligent in this matter. He must constantly put to death the flesh lest he himself be put to death by it.

This constitutes the difference between those who are Christians and sanctified and those who are without faith and the Holy Spirit, or who grieve and lose the Spirit. For although believers, as well as unbelievers, are not wholly free from the sinful lusts of the flesh, they yet remain in repentance and the fear of God; they hold fast to the belief that their sins are forgiven for Christ’s sake, because they do not yield to them, but resist them. Therefore they continue under forgiveness, and their remaining infirmity is not fatal, nor damning to them as it is to those who, without repentance and faith, go on in carnal security and purposely follow their evil lusts against their own conscience, casting away from themselves both faith and the Holy Spirit. Having received the Holy Spirit, Christians are to comfort themselves with the fact that they have help and strength to resist and mortify sin.

Luther, Martin, and John Sander. Devotional Readings from Luther’s Works for Every Day of the Year. Augustana Book Concern, 1915, pp. 291–92.