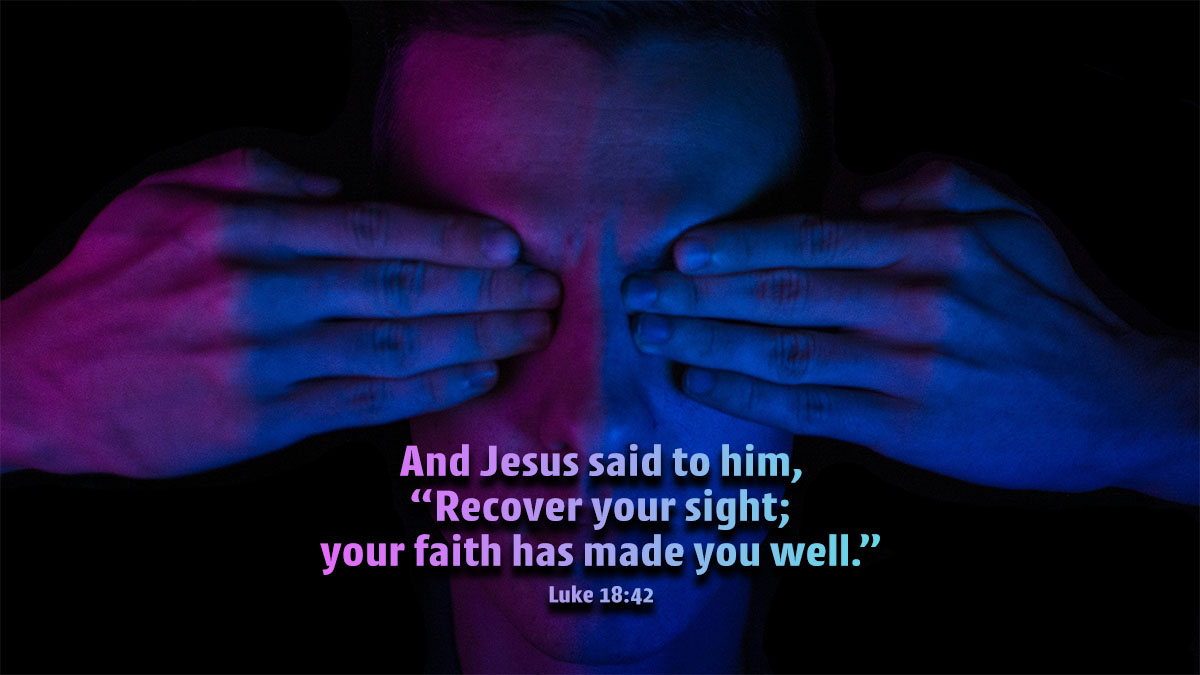 As he drew near to Jericho, a blind man was sitting by the roadside begging; and hearing a multitude going by, he inquired what this meant. They told him, “Jesus of Nazareth is passing by.” And he cried, “Jesus, Son of David, have mercy on me!” And those who were in front rebuked him, telling him to be silent; but he cried out all the more, “Son of David, have mercy on me!” And Jesus stopped, and commanded him to be brought to him; and when he came near, he asked him, “What do you want me to do for you?” He said, “Lord, let me receive my sight.” And Jesus said to him, “Receive your sight; your faith has made you well.”

The blind man hears that Christ was passing by; he had also heard of him before, that Jesus of Nazareth was a kind man, and that he helped every one who called on him. His faith and confidence in Christ grew out of his hearing, so he did not doubt but that Christ would help him. But such faith he could not have possessed had he not heard and known of Christ; for faith does not come except by hearing.

We see here how Christ encourages us, both by his works and words. First by his works in that he sympathizes so strongly with the blind man and makes it clear how pleasing faith is to him, so that Christ is at once absorbed with interest in the man, stops and does what the blind man desires in his faith. In the second place, Christ praises faith in words, and says: “Thy faith hath made thee whole;” he casts the honor of the miracle from himself and attributes it to the faith of the blind man. Thus faith is granted what it asks and is besides our great honor before God.

This blind man represents the spiritually blind, the state of every man born of Adam, who neither sees, nor knows the kingdom of God; but it is of grace that he feels and knows his blindness and would gladly be delivered from it. They are saintly sinners who feel their faults and sigh for grace. He sits among the teachers of the law and desires help. The people pass him by and let him sit, that is, the people of the law make a great noise and are heard among the teachers of good works; they go before Christ and Christ follows them. But when he heard Christ, that is, when a heart hears the gospel in faith, it calls and cries, and has no rest until it comes to Christ. Those who would silence and scold him are the teachers of works, who wish to quiet the doctrine and cry of faith; but they stir the heart the more. After he received his sight, all his work and life are only honor and praise to God; he follows Christ with joy, so that the whole world wonders and is thereby made better.

Luther, Martin, and John Sander. Devotional Readings from Luther’s Works for Every Day of the Year. Augustana Book Concern, 1915, pp. 68–69.