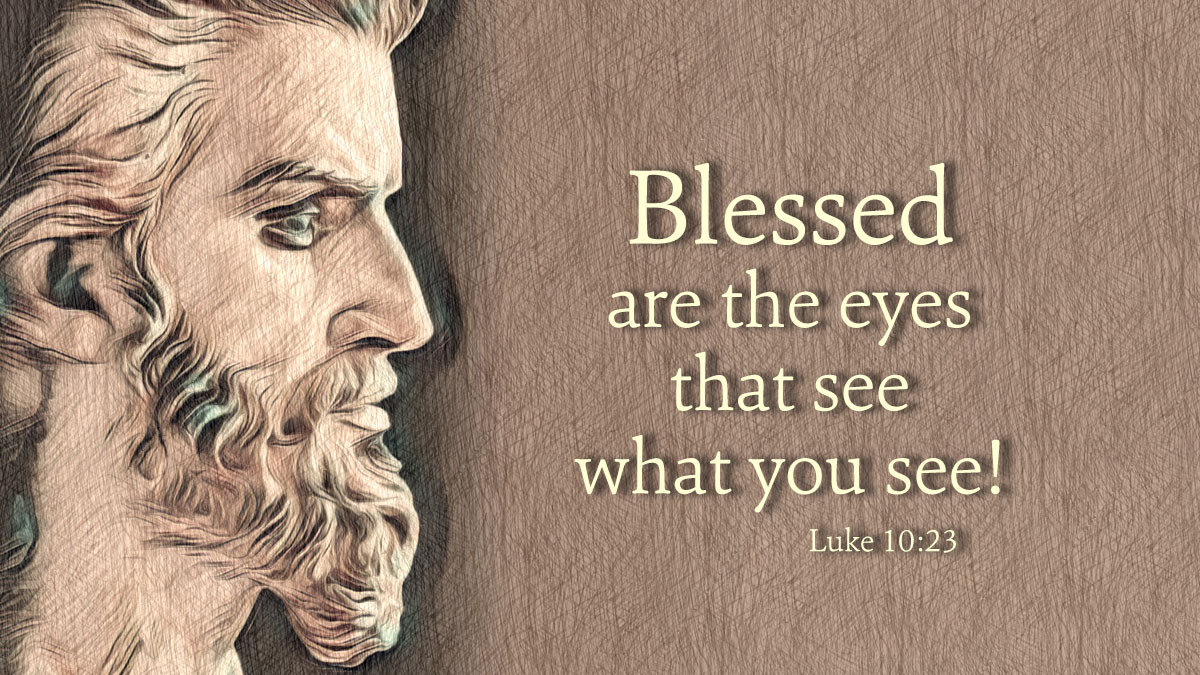 21 In that same hour he rejoiced in the Holy Spirit and said, “I thank thee, Father, Lord of heaven and earth, that thou hast hidden these things from the wise and understanding and revealed them to babes; yea, Father, for such was thy gracious will. 22 All things have been delivered to me by my Father; and no one knows who the Son is except the Father, or who the Father is except the Son and any one to whom the Son chooses to reveal him.” 23 Then turning to the disciples he said privately, “Blessed are the eyes which see what you see! 24 For I tell you that many prophets and kings desired to see what you see, and did not see it, and to hear what you hear, and did not hear it.”

This hearing and seeing must be understood as simply external, namely, that they saw Christ, heard his preaching, and witnessed the miracles which he performed. Certainly the Jews also beheld these things with their natural eyes, and some of them indeed experienced them in part at least in their hearts; but in fact they did not recognize him as the Christ, like the apostles and like Peter, who, representing all the others, said, “Thou art Christ, the Son of the living God.” Some of the Jews, indeed, like the apostles, recognized him as the Christ, but they were few.

In spirit, however, many prophets and kings saw Christ, as he himself says to the Jews concerning Abraham, “Your father Abraham rejoiced to see my day, and he saw it, and was glad.” The Jews thought he spoke of natural seeing, but he spoke of spiritual sight, as all pious hearts saw him before he was born, and still see him. If Abraham saw him, doubtless many prophets in whom the Holy Ghost dwells saw him; and though this seeing made the holy fathers and prophets blessed, still they had a heartfelt desire to behold Christ the Lord in the flesh, as is intimated time and again in the prophets.

Therefore the Lord here says to his disciples, who saw both with their natural and spiritual eyes, “Blessed are the eyes which see the things that ye see,” as though we would say, This is a blessed time, an acceptable year, a special season of grace. That which is now at hand is so precious that the eyes which see it are truly called blessed. In the past ages the gospel was never preached so publicly and clearly unto all men as at present. The Holy Spirit was not yet publicly poured out, but Christ had begun the work of the Holy Spirit, and afterwards the apostles continued it in great earnestness. Therefore he calls all those blessed who hear and see this grace in Christ.

Luther, Martin, and John Sander. Devotional Readings from Luther’s Works for Every Day of the Year. Augustana Book Concern, 1915, pp. 234–35.