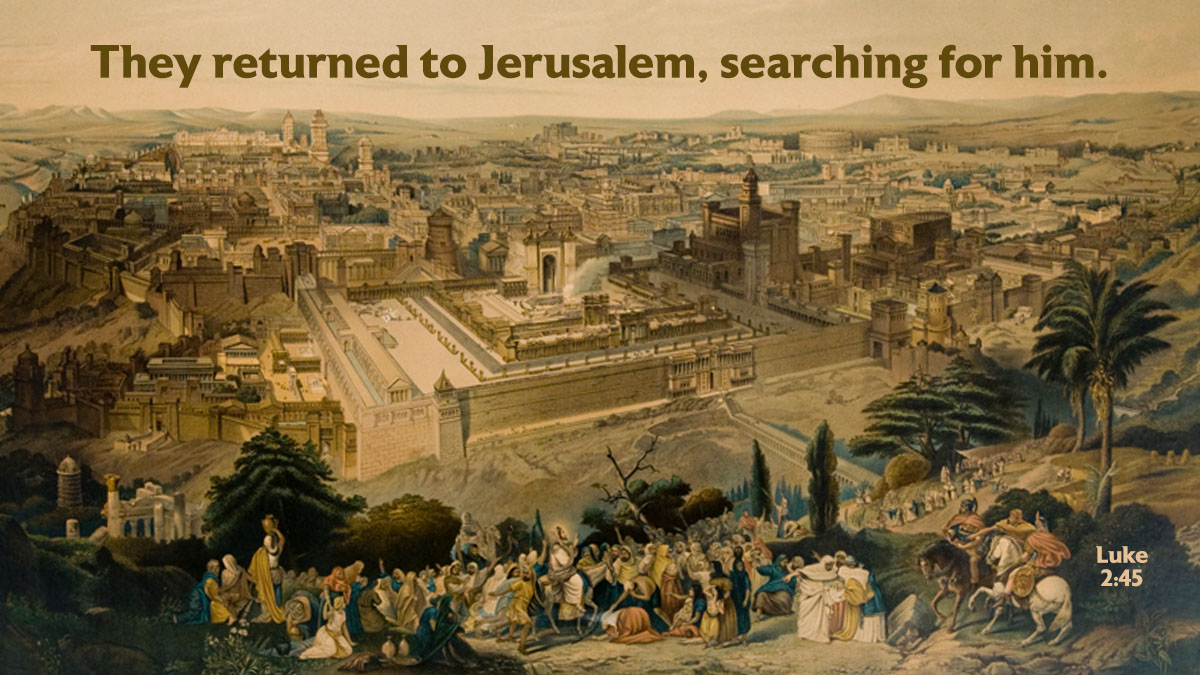 41 Now his parents went to Jerusalem every year at the feast of the Passover. 42 And when he was twelve years old, they went up according to custom; 43 and when the feast was ended, as they were returning, the boy Jesus stayed behind in Jerusalem. His parents did not know it, 44 but supposing him to be in the company they went a day’s journey, and they sought him among their kinsfolk and acquaintances; 45 and when they did not find him, they returned to Jerusalem, seeking him.

Here you see what Mary experienced. Although she is the mother of a child in whom she might have gloried before all mothers, yet you perceive how God deprived her of all happiness. She had reason to fear that God was angry with her and would no longer have her to be the mother of his Son. Only those who have passed through similar experiences will understand what she suffered. Therefore we should apply this example to ourselves, for it was not recorded for her sake, but for our benefit. We should profit by her example and be prepared to bear our sorrow, should a like affliction of losing Christ befall us.

When God vouchsafes to us a strong faith and a firm trust in him, so that we are assured that he is our gracious God and we can depend upon him, then we are in paradise. But when God permits our hearts to be discouraged and we believe he takes from us Christ our Lord; when our conscience feels that we have lost him and amidst trembling and despair our confidence is gone, then we are truly in misery and distress. Even if we are not conscious of any special sin, yet in such a condition we tremble and doubt whether God still cares for us; just as Mary here doubts and knows not whether God still deems her worthy to be the mother of his Son. Only strong minds can endure such temptations, and there are not many people whom God tests to this degree.

God does this especially to guard his children against a twofold danger. First, being strong in their own mind and arrogant, they might ultimately depend upon themselves and believe they are able to accomplish everything in their own strength and become presumptuous and overconfident. Secondly, he wants to give us an example. For if we had no examples of saints who passed through the same experiences we should be unable to bear our trials and would imagine that we alone are thus afflicted. But when we see that Mary and other saints have also suffered we are comforted; for their example shows us that we should patiently wait until God strengthens us.