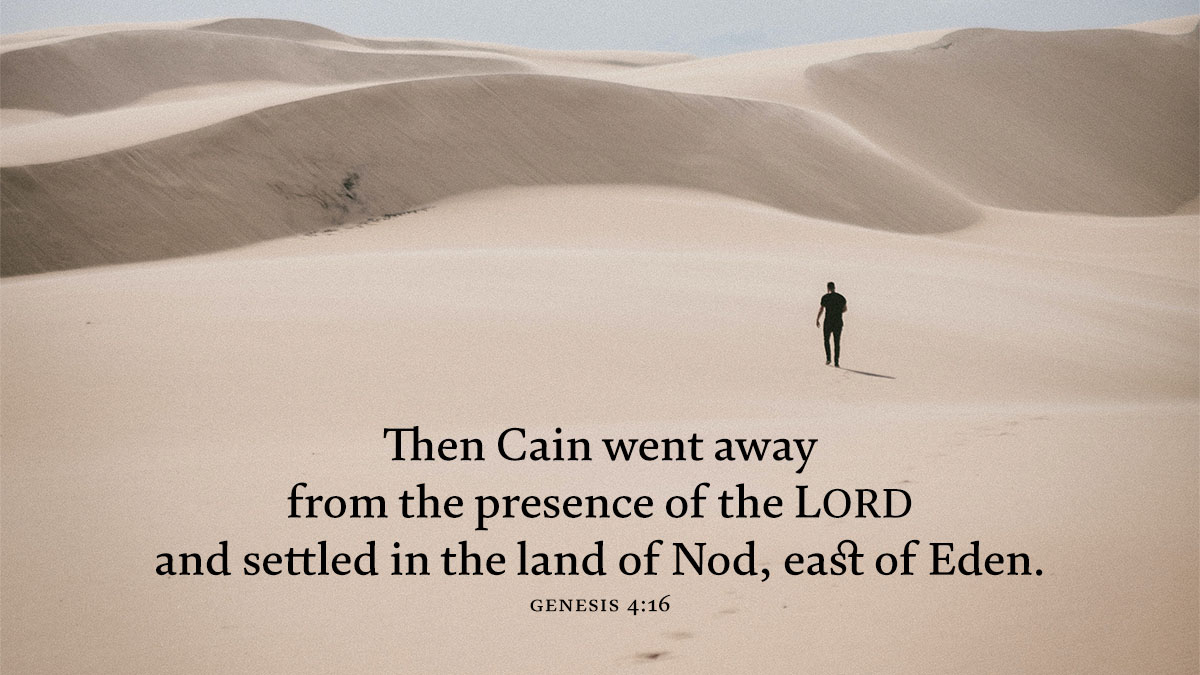 Then Cain went away from the presence of the LORD, and dwelt in the land of Nod, east of Eden.

Moses leaves it to the thoughtful reader to reflect how miserable and full of tears this departure of Cain from his father’s house must have been. His godly parents had already lost their son Abel; and now, at the command of God, the other son departs from them into banishment, loaded with divine curses, on account of his sin—the very son whom his parents had hoped to be the only heir of the promise. But they obey the command of God and cast out their son.

Adam and Eve had learned by their own experience in paradise that it was no light sin to depart from the command of God; therefore they thought: Our sin in paradise has been punished with death, and with an infinite number of other calamities into which we have been thrown since we were driven out of paradise. Now that our son has committed so atrocious a sin, it behooves us not to resist the will of God and his righteous judgment, however bitter we feel them to be.

This departure from his home was, I have no doubt, most bitter also to Cain himself. For he was compelled to leave, not only the common home, his dear parents and their protection, but his hereditary right of primogeniture, the prerogative of the kingdom and of the priesthood, and the communion of the Church. Hence we have the expression in the text, that Cain went out from the presence of the Lord. “The presence” or “face of the Lord” are all those things and means by which the Lord makes himself known to us. Thus the face of the Lord, under the Old Testament, was the pillar of fire, the cloud, the mercy seat and the like. Under the New Testament, the face of the Lord is baptism, the Lord’s Supper, the ministry of the Word. For by these things, as by visible signs, the Lord makes himself known to us, and shows that he is with us, that he cares for us and favors us. Cain “went out” to where there was no “face of God,” no visible sign by which he could derive the consolation that God was present with his favor. A wretched departure full of tears.

Luther, Martin, and John Sander. Devotional Readings from Luther’s Works for Every Day of the Year. Augustana Book Concern, 1915, pp. 95–96.