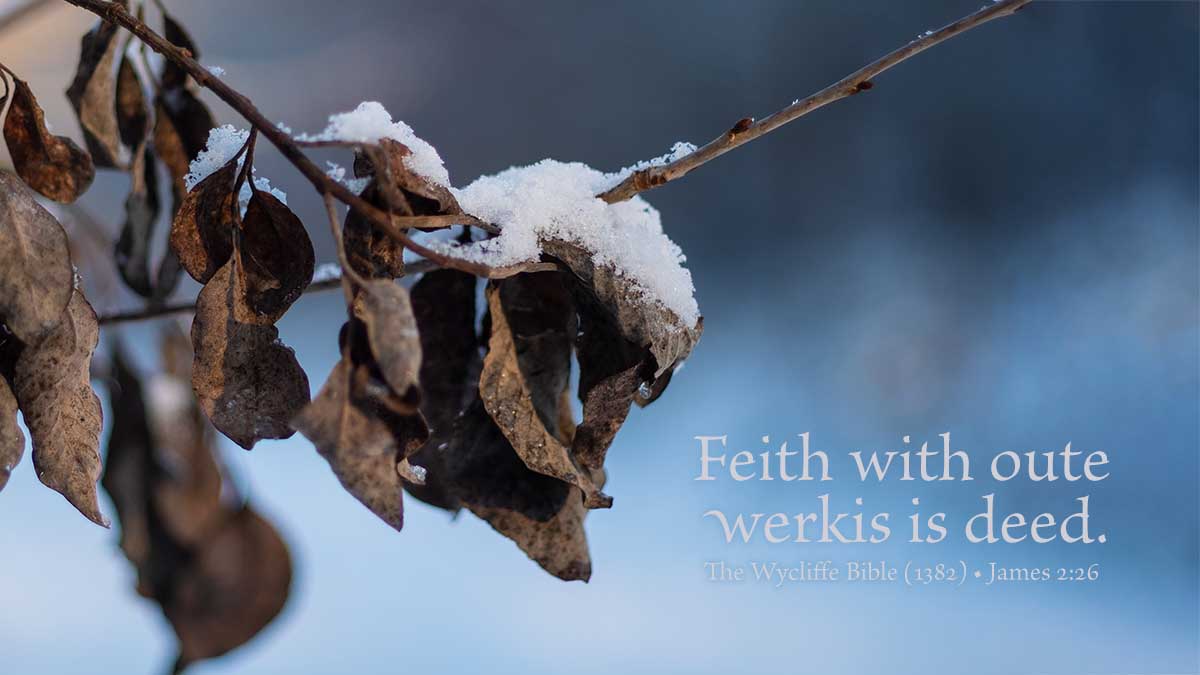 18 But some one will say, “You have faith and I have works.” Show me your faith apart from your works, and I by my works will show you my faith. 19 You believe that God is one; you do well. Even the demons believe—and shudder. 20 Do you want to be shown, you shallow man, that faith apart from works is barren? 21 Was not Abraham our father justified by works, when he offered his son Isaac upon the altar? 22 You see that faith was active along with his works, and faith was completed by works, 23 and the scripture was fulfilled which says, “Abraham believed God, and it was reckoned to him as righteousness”; and he was called the friend of God. 24 You see that a man is justified by works and not by faith alone. 25 And in the same way was not also Rahab the harlot justified by works when she received the messengers and sent them out another way? 26 For as the body apart from the spirit is dead, so faith apart from works is dead.

aith is an active, living thing. But in order that men may not deceive themselves and think they have faith when they have not, they are to examine their works, whether they also love their neighbors and do good to them. If they do this, it is a sign that they have the true faith. If they do not do this they only have the sound of faith and they are as one who sees himself in a glass; when he leaves it, he sees himself no more, but sees other things, forgetting the face in the glass. From this passage deceivers and blind masters have demolished faith and established only good works as though righteousness and salvation did not rest on faith, but on our works.

But James means that a Christian life is nothing but faith and love. Love is being kind and useful to all men, to friends and enemies. Where faith is right it certainly loves, and does to others in love as Christ did to him in faith. Thus every one is to beware lest he has in his heart simply a dream and fancy instead of faith, and thus deceives himself. This he will not learn as well anywhere as in doing the works of love. Beware, if your life is not in the service of others, and you live only for yourself, and care nothing for your neighbor; then your faith is certainly nothing, for it does not do what Christ has done for you. Paul also says: “If I have faith enough to remove mountains, and have not charity (love), I am nothing.” This explains the whole matter, not that faith is insufficient to make us pious, but that a Christian life must embrace and never separate these two, faith and love. But the presumptuous undertake to separate them, they want only to believe and not to love, they despise their neighbor, and yet pretend to have Christ. This is false and must fail. Thus we say, then, that faith is everything and saves us, that a man needs no more for his salvation. But he is on this account not idle, but labors much for the benefit of his neighbor and not for himself; for he does not need it, he has enough in Christ.

Luther, Martin, and John Sander. Devotional Readings from Luther’s Works for Every Day of the Year. Augustana Book Concern, 1915, pp. 352–53.