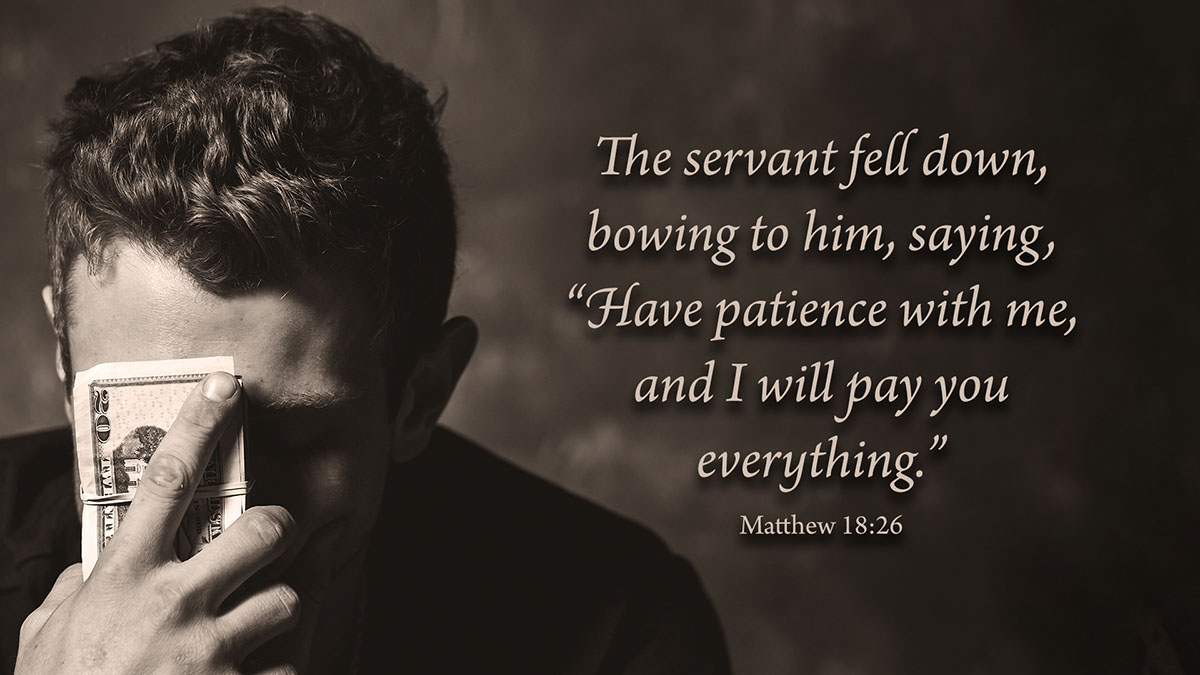 23 “Therefore the kingdom of heaven may be compared to a king who wished to settle accounts with his servants. 24 When he began the reckoning, one was brought to him who owed him ten thousand talents; 25 and as he could not pay, his lord ordered him to be sold, with his wife and children and all that he had, and payment to be made. 26 So the servant fell on his knees, imploring him, ‘Lord, have patience with me, and I will pay you everything.’ 27 And out of pity for him the lord of that servant released him and forgave him the debt.

What does the servant do? He foolishly thinks he will pay the debt, falls down and asks the Lord to have patience with him. This is the torment of all consciences, when sin comes and smarts deeply until they feel in what a sad state they are before God; then there is no rest; they run hither and thither, seek help here and there to be freed from sin, and in their presumption think they can do enough to pay God in full. Thus we were taught hitherto. From this also have come so many pilgrimages, cloisters, masses and other nonsense. So we fasted and scourged ourselves, and became monks and nuns. All this came because we undertook to begin a life and to do many works of which God should take account and allow himself to be paid by them. Thus we thought to quiet the conscience and put it at peace with God. We acted just like this foolish servant.

Now a heart that is thus smitten with the law, feels its blows and distress, is truly humiliated. Therefore it falls before the Lord and asks for grace, except that it still makes the mistake of intending to help itself, for this we cannot root out of our nature. When the conscience feels such misery, it dare promise more than all the angels in heaven are able to fulfil. When our consciences were forced in the confessional, we did everything that was imposed upon us and gave more than was demanded of us. What should the poor people do? They were glad to be helped even in this manner; they ran and martyred themselves to be rid of their sins. Yet it did no good whatever, for the conscience remained in doubt as before, and did not know on what terms it stood with God.

But the Lord comes and sympathizes with this distress, because the servant is captive and bound in his sins, and yet is such a fool as to want to help himself; he looks for no mercy, knows nothing to say of grace, and feels nothing but sins, which press him heavily, and knows of no one to help him. Then his lord has mercy on him and sets him free. Thus God deals with us. He forgives our debt, because he hears our cries and sees our humiliation.

Luther, Martin, and John Sander. Devotional Readings from Luther’s Works for Every Day of the Year. Augustana Book Concern, 1915, pp. 370–71.