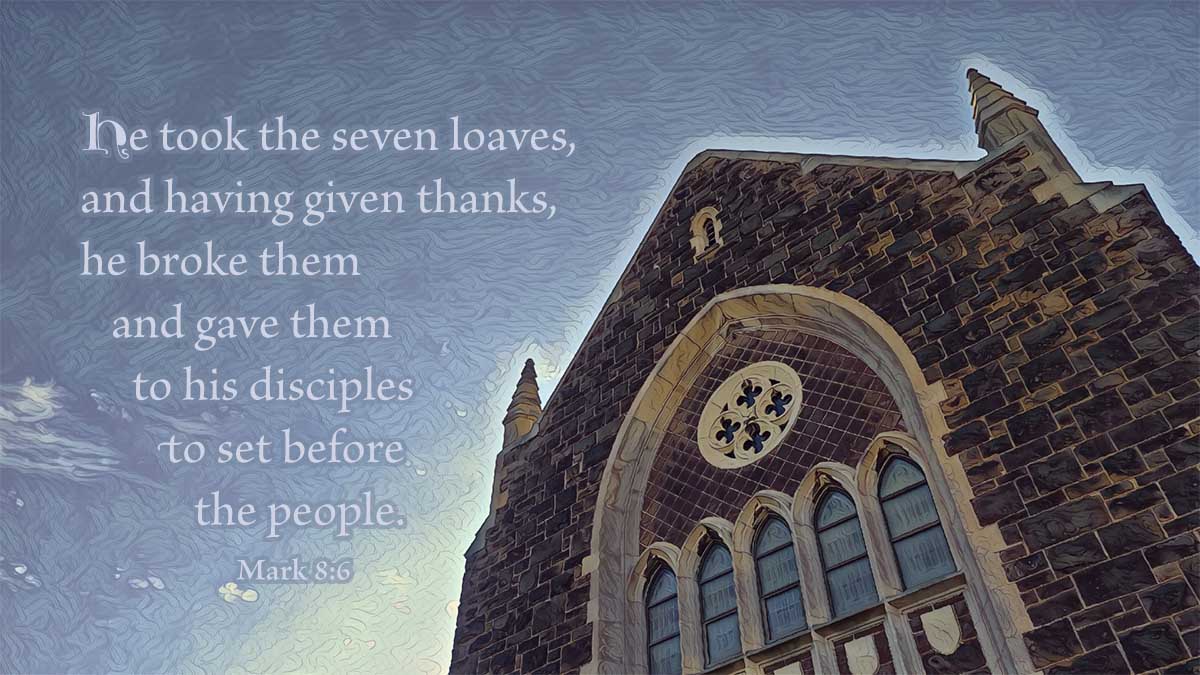 4 And his disciples answered him, “How can one feed these men with bread here in the desert?” 5 And he asked them, “How many loaves have you?” They said, “Seven.” 6 And he commanded the crowd to sit down on the ground; and he took the seven loaves, and having given thanks he broke them and gave them to his disciples to set before the people; and they set them before the crowd.

Christ commands the disciples to set the loaves before the multitude, by which he shows that he will administer his work and gifts through the instrumentality of human agencies. He thus teaches those who have an office or commission and those who stand before others faithfully and conscientiously to serve the people in obedience to Christ by cheerfully and meekly giving of their own and imparting to others what God entrusted and gave to them. Especially would he teach them to be useful and bring comfort to the poor flock of Christians by their good example of faith and love in order to strengthen their faith and love. He here shows how he gives and will give rich blessings to the end that such office and service may accomplish much good, and bring forth much fruit.

Let us also learn that the gifts and good things which God gives, are not profaned, if they are used in helping the poor in acts of charity, as Christ promises when he says: “Give, and it shall be given unto you; good measure, pressed down, and shaken together, and running over, shall men give into your bosom.” This has been experienced by many pious people everywhere who have liberally given before our time for the support of the ministerial office, schools, the poor and the like. God gave to them for so doing good times, peace and quiet. Hence arise the proverbs among the people which have been confirmed: One loses no time by going to church; giving alms does not impoverish; possessions unjustly gotten bring no blessing.

But the world will not believe this. It goes on with its raking and scraping together of riches and will let no one be satisfied with what he has; every man desires more than his fellow and seeks riches by robbing, stealing and oppressing the poor. It is evident from this that there is no blessing in such riches; but only the curse of God, misery, misfortune and agony of heart. Therefore a Christian should think much more of a dollar that God gives him than of all the great treasures of the rich misers upon the earth. He has this beautiful treasure in his home which is called godliness, a peaceful quiet heart in God.

Luther, Martin, and John Sander. Devotional Readings from Luther’s Works for Every Day of the Year. Augustana Book Concern, 1915, pp. 314–15.