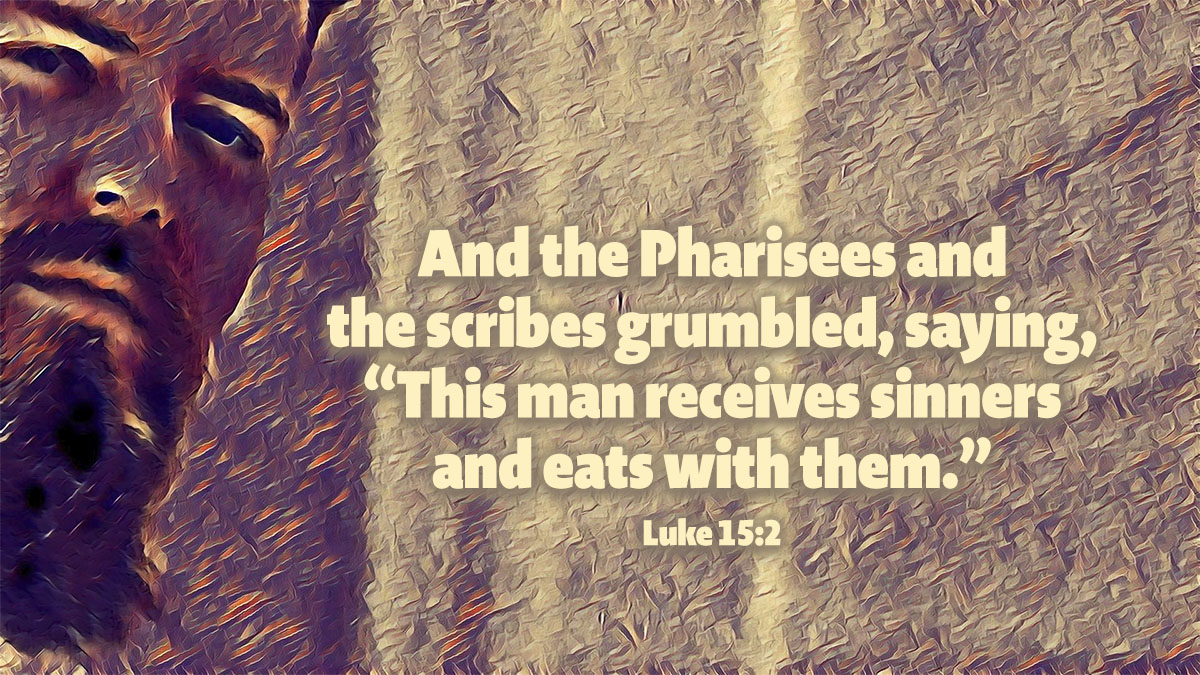 1 Now the tax collectors and sinners were all drawing near to hear him. 2 And the Pharisees and the scribes murmured, saying, “This man receives sinners and eats with them.”

We have here the Pharisees and hypocrites, who are exceedingly pious people and are over head and ears in holiness. We have also the open sinners and publicans, who were over head and ears in sin. These were despised by those shining saints, and were not considered worthy of their society. But Christ intervenes with his judgment and says that those saints are to stoop down and take the sinners upon their shoulders, and with their righteousness and piety they are to bear in mind to help the others out of their sins.

It is truly a Christian work to descend and get mixed up in the mire of the sinner, taking his sin upon ourselves and floundering out of it with him, not acting otherwise than if his sins were our own. We should rebuke and deal with the sinner in earnest; yet we are not to despise but sincerely to love him. There are great and good works in which we should exercise ourselves. But no man pays attention to them. Such works have entirely faded away, and it is to be feared that the holiest are in the deepest hell, and that sinners are mostly in heaven. Moses acted thus when the Israelites worshiped the molten calf. He mingled freely with the people in their sins. He punished them severely, but afterward he went up and bowed down before God, and prayed that he would forgive the people their sin, or blot him out of the Book of Life. Here we have a man who knew that God loved him and had written his name in the book of the blessed. Thus Paul also at times severely rebuked the Jews, yet he writes to the Romans, “I could wish that myself were accursed from Christ for my brethren, my kinsmen according to the flesh.” Thus we should act and serve our neighbor; but such a course is much too lofty for reason and passes beyond its conception. Our bearing toward sinners should be: inwardly, the heart in service; outwardly, the tongue in earnest. This is what Christ, our Captain, has manifested in himself. He could have justly condemned us as sinners, but de did not do so. He gave himself to be our Servant. His righteousness has served for our sins, his fulness for our feebleness, his life for our death.

Luther, Martin, and John Sander. Devotional Readings from Luther’s Works for Every Day of the Year. Augustana Book Concern, 1915, pp. 280–81.