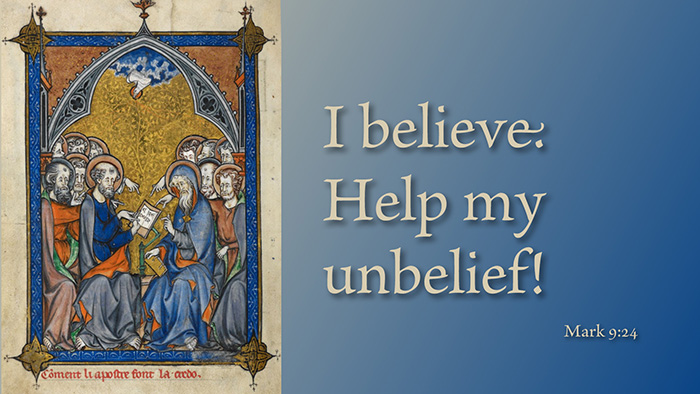 From the Word: Immediately the father of the child cried out, and said with tears, “I believe. Help my unbelief!” (Mark 9:24)

From the Confessions: The Ecumenical Creeds, The Apostles’ Creed

I believe in God, the Father almighty,
creator of heaven and earth.

I believe in Jesus Christ, his only Son, our Lord,
He was conceived by the Holy Spirit
and born of the virgin Mary.
He suffered under Pontius Pilate,
was crucified, died, and was buried;
He descended into hell.
On the third day he rose again.
He ascended into heaven,
and is seated at the right hand of the Father,
He will come again to judge the living and the dead.

I believe in the Holy Spirit,
the holy catholic Church,
the communion of saints,
the forgiveness of sins,
the resurrection of the body,
and the life everlasting. Amen

Pulling It Together: Our word “creed” comes from the Latin “credo,” which means, “I believe.” When we say a creed, we are concisely confessing what we believe.

We confess the orthodox, ancient teachings of the Apostles using three principal creeds, the first of which is the Apostles’ Creed. (The other two creeds are the Nicene and the Athanasian creeds, each which seeks to spell out more clearly the who and how of the Trinity.) The earliest mention of this creed by name is in a letter from the late-fourth century, probably written by Ambrose, the Archbishop of Milan. This indicates that the creed had already been in use for some time, at least in some form. The form of the Apostles’ Creed we use today is based on an older, shorter version called The Old Roman Creed, from a half-century earlier:

I believe in God the Father Almighty.
And in Jesus Christ his only-begotten Son our Lord,
who was born of the Holy Ghost and the Virgin Mary;
crucified under Pontius Pilate, and buried;
the third day he rose from the dead;
he ascended into heaven, and sitteth at the right hand of the Father;
from thence he shall come to judge the quick and the dead.
And in the Holy Ghost;
the holy Church;
the forgiveness of sins;
the resurrection of the body;
the life everlasting.

The Apostles’ Creed is divided in three sections comprising the name of God: the Father, the Son, the Holy Spirit. God is what (or rather, who) we believe. Using this ancient creed, we first confess a distillation of Scripture, and what the Athanasian Creed later says of God: that he is “Unity in Trinity and the Trinity in Unity” (line 27).

This teaching is difficult to believe by way of our limited reasoning. Therefore, we confess what the Scripture teaches, and with the father of the boy with the unclean spirit, say, “I believe; help my unbelief!” Check out Sola’s Confirmation workbook, The Apostle’s Creed, designed to be a small group Bible study, student book for home school or independent study programs, or as a classroom tool and homework resource as part of an existing confirmation program.

What a great way to start the year. You said you would do it, and you did! Thank you for guiding all of us to the foundations of our faith. We cannot build strong on weak foundations.
2

Thank you, Katherine. I look forward to sharing with you throughout the year. May you have a blessed year with the Lord.
3

Hello. Is the the daily devotional you mentioned in your article in the Nov./Dec. issue of Connections magazine?
4

Yes, this is the daily devotional mentioned in the magazine, Nancy.
5

Is it possible to print these devotions?
6

I will ask our webmaster to make that happen, Jim.
7