Noticing the Heart of Jesus
Scripture and a reading from Luther's sermons and devotional writings
Pastor Mark Ryman - February 8, 2022 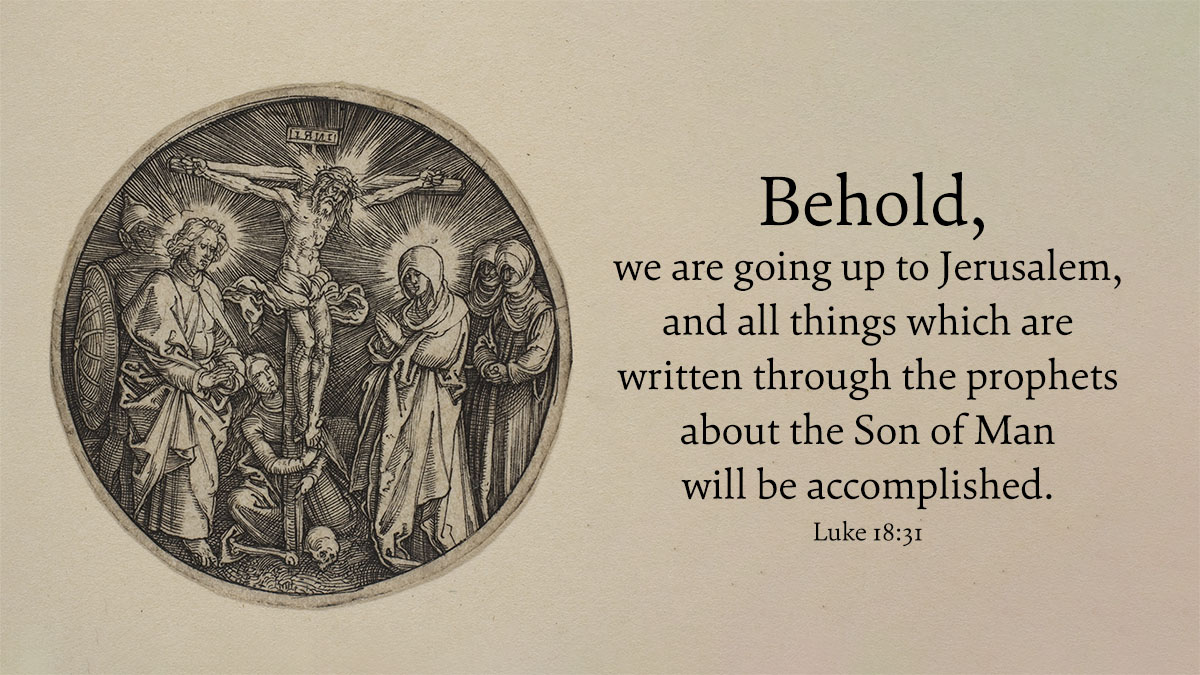 And taking the twelve, he said to them, “Behold, we are going up to Jerusalem, and everything that is written of the Son of man by the prophets will be accomplished.

Christ spoke these words on his way to Jerusalem at the time of the Easter festivities before he finished his passion, when his disciples least expected to witness his sufferings, but instead anticipated a joyful occasion at the Feast of the Passover. He spoke them that his disciples might later grow stronger in their faith, when they recalled the fact that he had told them before, that he had voluntarily offered himself as a sacrifice, and that he was not crucified by the power or strategy of his enemies, the Jews. Long before this Isaiah had prophesied that Christ would voluntarily and cheerfully give himself as a sacrifice. The angel also on Easter morning admonishes the women to call to mind what he here says, in order that they might be assured and the more firmly believe that he suffered willingly on our behalf.

The true foundation of a thorough understanding of Christ’s passion is when we not only consider his sufferings, but also his heart and will in those sufferings; for all they who view his sufferings so as not to see his will and heart in them are more terrified than they rejoice on account of them. Where one sees Christ’s will and heart in his passion, it brings true comfort, assurance and pleasure in Christ. Thus the psalmist praises this will of God and of Christ, when he says: “I delight to do thy will, O my God.” The apostle in the Epistle to the Hebrews says: “By which will we have been sanctified.” It does not say, Through the suffering and blood of Christ, which is also true; but through the will of God and of Christ. They were both of one will to sanctify us through the blood of Christ.

In this gospel he shows us this will to suffer, when he first announced that he would go up to Jerusalem and allow them to crucify him; as if he had said, Look into my heart and see that I do all willingly, freely and cheerfully, in order that it may not terrify nor shock you, when you shall see it, and think that I do it reluctantly, and must do it; that I am forsaken and the power of the Jews forces me to it.

Luther, Martin, and John Sander. Devotional Readings from Luther’s Works for Every Day of the Year. Augustana Book Concern, 1915, pp. 54–55.