One in Ten
Scripture and a reading from Luther's sermons and devotional writings
Pastor Mark Ryman - October 15, 2022 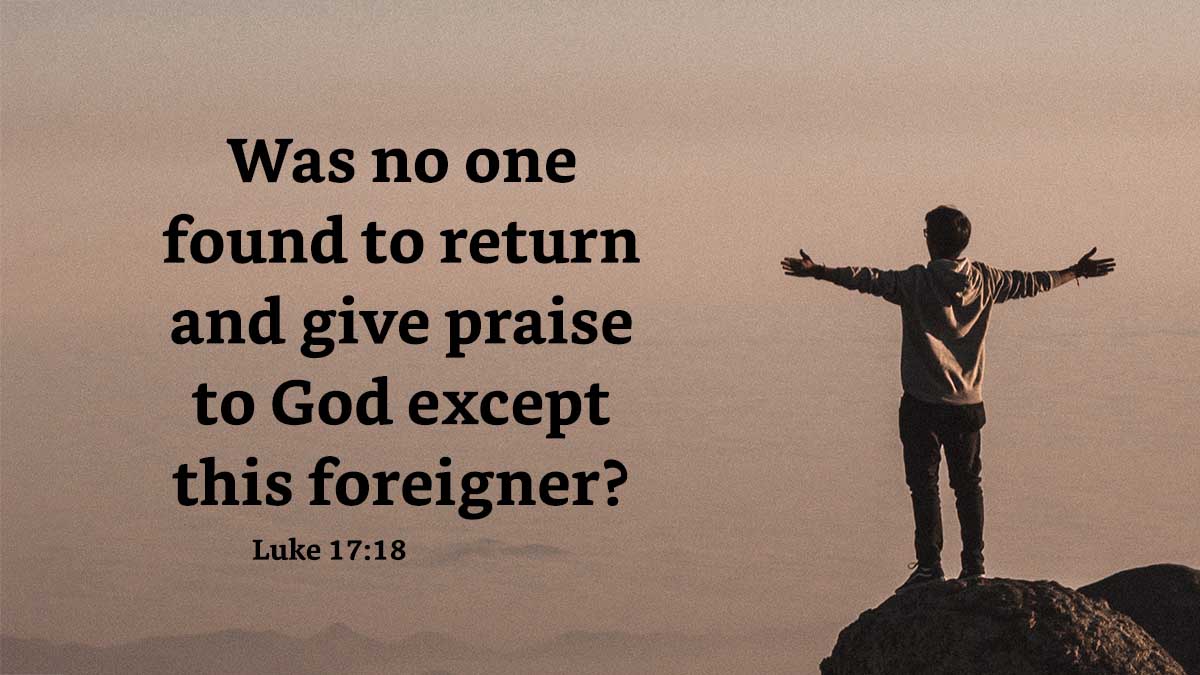 11 On the way to Jerusalem he was passing along between Samaria and Galilee. 12 And as he entered a village, he was met by ten lepers, who stood at a distance 13 and lifted up their voices and said, “Jesus, Master, have mercy on us.” 14 When he saw them he said to them, “Go and show yourselves to the priests.” And as they went they were cleansed. 15 Then one of them, when he saw that he was healed, turned back, praising God with a loud voice; 16 and he fell on his face at Jesus’ feet, giving him thanks. Now he was a Samaritan. 17 Then said Jesus, “Were not ten cleansed? Where are the nine? 18 Was no one found to return and give praise to God except this foreigner?” 19 And he said to him, “Rise and go your way; your faith has made you well.”

The stranger sincerely gives God all the glory. O, what a terrible example is this! Among ten only one, and he among the least and most worthless. How entirely does God overlook that which is great, wise, spiritual and honorable! Yet such people have no fear, but become hardened and petrified in their nature. It is also terrible that the Lord knows that ten were cleansed, of this they did not think. He inquires after and seeks them: Where are the nine? O, what a frightful thing it will be when they at some future time will feel this inquiry and must answer whither they went, that they did not give God the glory. Then they will say: Well, we have nevertheless praised and thanked God, and thus our priests have taught us! Then it will appear whether it will help us to follow the doctrines of men in the name of God, and to forsake the doctrine and will of God. We are sufficiently warned in the gospel, so that no excuse will help us if we allow ourselves to be deceived. In Baptism we have all vowed to follow Christ and his doctrine; no one has vowed to follow the pope, the bishops and clergy. Thus Christ has thoroughly rejected and forbidden the doctrines of men.

Christ comforts his poor Samaritans, who for his name’s sake must risk their lives with the priests and Jews, and strengthens their hope with the sentence and judgment that he demands the nine and judges them as God’s thieves, who steal God’s glory, but he justifies the Samaritan. This hope gives them strong courage, that their cause before God will be rightly maintained and will stand, and that that of the others will be condemned, it matters not how great they were and what power they had on earth.

Before Christ justifies the Samaritan, he judges the nine, that we should be sure not to hasten or desire revenge, but leave it only to him, and go our way. For he himself is so careful to defend the right and punish the wrong. Nor does he wait long to have them accused before him, but of his own free will summons them, so that without doubt the cause of unbelievers affects him more and sooner than it strikes or harms us.

Luther, Martin, and John Sander. Devotional Readings from Luther’s Works for Every Day of the Year. Augustana Book Concern, 1915, pp. 363–64.