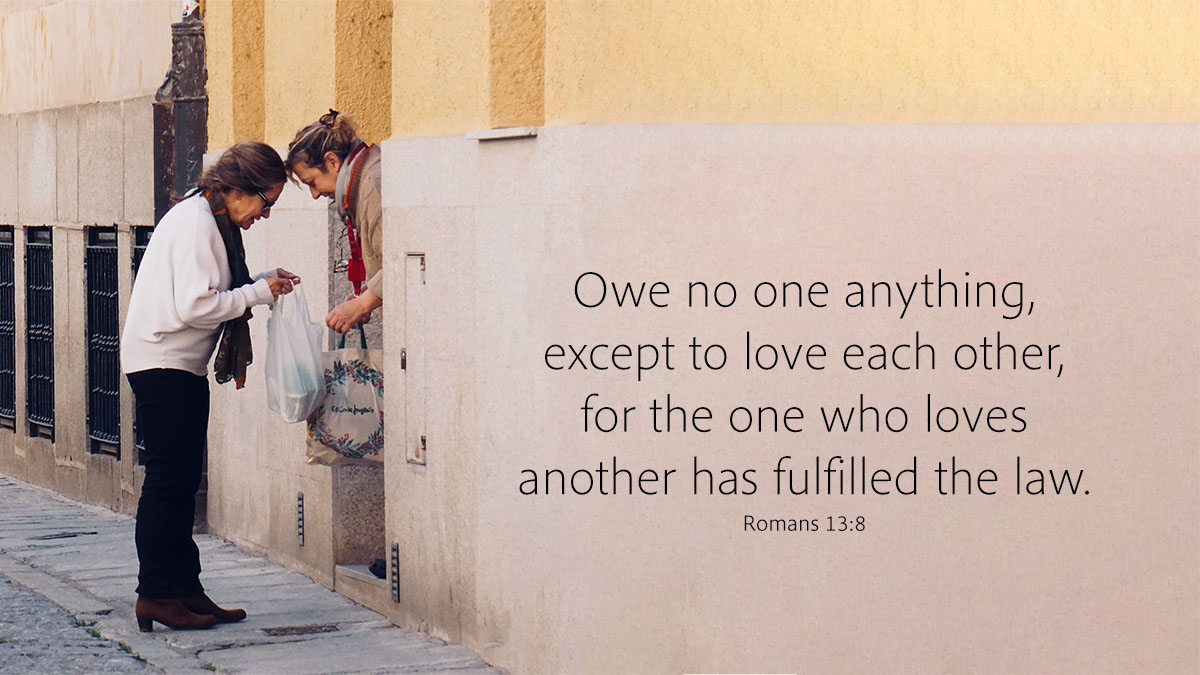 Owe no one anything, except to love one another; for he who loves his neighbor has fulfilled the law.

Innumerable are the books and doctrines produced for the direction of man’s conduct. There is still no limit to the making of books and laws. These laws and doctrines would be tolerated and received with more favor, if they were founded upon and administered according to the great law of love. Of love’s higher authority we find many illustrations in the Scriptures. Christ makes particular mention of this matter when he refers to David and his companions eating the holy show-bread. Though a certain law prohibited all but the priests from partaking of this holy food, Love was empress here, and free. Love was over the Law, subjecting it to herself. The Law had to yield for the time being, had to become invalid, when David suffered hunger.

Had the priest been disposed to refuse David the holy bread, had he blindly insisted on honoring the prohibition of the Law and failed to perceive the authority of Love, had he denied this food to him who hungered, what would have been the result? So far as the priest’s assistance went, David would have had to perish with hunger, and the priest would have been guilty of murder for the sake of the Law. Here, indeed, the most strenuous right would have been the most strenuous wrong. Moreover, on examining the heart of the priest, you would find the abomination of making sin where there is no sin, and a matter of conscience where there is no occasion for it. In connection with this same incident, Christ teaches that we are to do good to our neighbor on the Sabbath, to administer as necessity demands, whatever the Sabbath restrictions of the Law. For when a brother’s need calls, Love is authority and the Law of the Sabbath is void.

Were laws conceived and administered in love, the number of laws would matter little. Though one might not know all of them, he would learn from the one or two, of which he had knowledge, the principle of love taught in all; and though he were to know all laws, he might not discover the principle of love any more readily than he would in one. No greater wrong, calamity and wretchedness is possible on earth than the teaching and enforcing of laws without love. “Love is the fulfilling of the Law.”

Luther, Martin, and John Sander. Devotional Readings from Luther’s Works for Every Day of the Year. Augustana Book Concern, 1915, pp. 63–64.