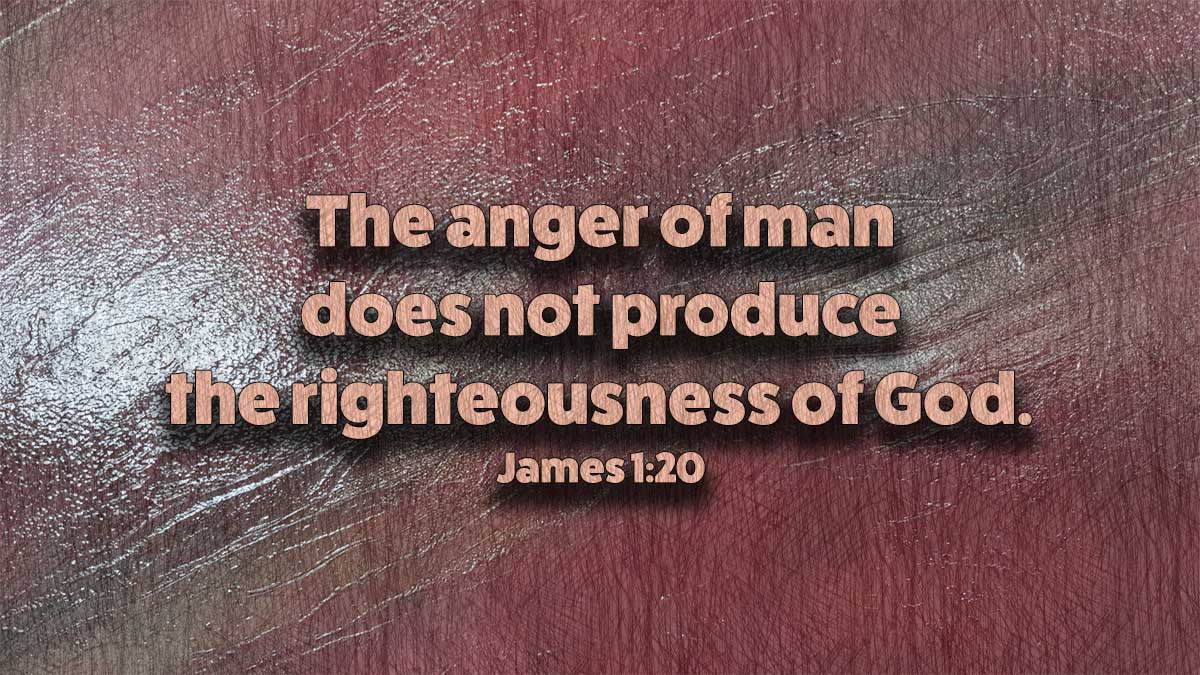 19 Know this, my beloved brethren. Let every man be quick to hear, slow to speak, slow to anger, 20 for the anger of man does not work the righteousness of God.

To God alone belong honor, judgment, and vengeance, hence also wrath. But I fear this will not be done as long as we are in this life, and yet it would be grace, if we only became so pious as to make a beginning; for as soon as we suffer an injury, flesh and blood at once act as flesh and blood; we begin to rage and rave in anger and impatience. It is natural for us to feel hurt when suffering, injustice and violence attack us, hence it becomes necessary to check and restrain the feelings of anger and to resist them. The feeling that you are injured will pass away, but that desire to avenge yourself in any way is prohibited. If you cannot secure your rights without doing greater harm, let it go. It is not good to check or punish one wrong with another, nor is God willing to have universal justice perish because of your petty claims.

We know that God has committed the judiciary to the civil government and to that end established princes and lords, who bear the sword in God’s stead. Aside from this they are personally exactly like the other people are, having no more right to be angry than any one else. The judge or executioner, in condemning and executing a man that never personally did them an injury, does so in God’s stead, officiating in God’s place, inasmuch as the malefactor has become liable to God’s sentence and penalty. There should be no anger, nor bitterness in man’s heart, while God’s wrath and sword accomplish their work.

The same holds good in war, when you must defend yourself, thrust, beat and burn, then wrath and revenge are likely to reign supreme, and yet it should not proceed from the heart of man, but emanate from divine authority and command, so that the wicked be punished and peace be maintained. Hence where such wrath exists it is not to be called man’s wrath, but God’s. When unhappily you commingle God’s and man’s wrath, it is the miserable doings of the devil. Thus the wrath of man is at all times full of envy to his neighbor, but God’s wrath is administered according to his command and springs from a good heart, that deplores the fact that man should suffer any ill, and yet God must punish and abolish wickedness.

Luther, Martin, and John Sander. Devotional Readings from Luther’s Works for Every Day of the Year. Augustana Book Concern, 1915, pp. 298–99.