That They May Hear and Believe
Scripture and a reading from Luther's sermons and devotional writings
Pastor Mark Ryman - September 1, 2022 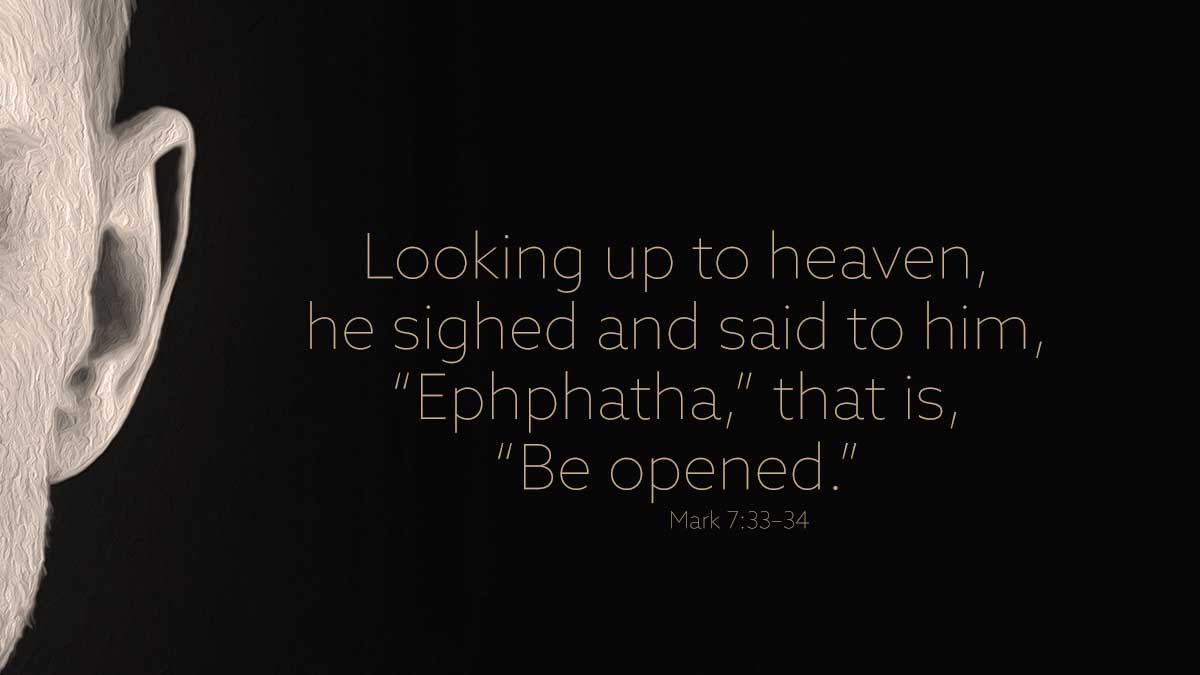 32 And they brought to him a man who was deaf and had an impediment in his speech; and they besought him to lay his hand upon him. 33 And taking him aside from the multitude privately, he put his fingers into his ears, and he spat and touched his tongue; 34 and looking up to heaven, he sighed, and said to him, “Ephphatha,” that is, “Be opened.” 35 And his ears were opened, his tongue was released, and he spoke plainly.

The people bring the poor man to the Lord, who takes him aside, lays his fingers into his ears, spits and touches his tongue with spittle, looks up toward heaven, and sighing says, Ephphatha, that is, be opened. This is a lovely picture. Those who bring the deaf-mute to the Lord signify the office of the ministry. Apostles and ministers lead the poor consciences of men to God.

This is done in three ways, by preaching, by a godly life and by intercession. With the preaching of the Word, though it be by a sinner, men are brought to God; a godly life serves to show the Word so much the mightier in its power; to pray for the people leads them on the road to faith and works.

If the Word thus goes on its way in a threefold manner, it cannot fail to bring forth fruit. God says, “My Word, that goeth forth out of my mouth, shall not return unto me void.” This is indicated by the bringing of the deaf-mute into Christ’s presence. The ministers bring the sinners before God, who opens their eyes, ears and mouth. When persons are thus brought to God, he gives them grace to believe. By laying his fingers into the man’s ears Jesus signifies that through the Word he breathes the Holy Spirit into him, and makes the heart believing, chaste and holy. The spittle laid on the man’s tongue typifies the Word of God which is put into his mouth that he may be able to speak it. For wherever there is true faith, the Spirit will give you no peace. “I believe,” says David, “therefore have I spoken.”

That Christ takes the man aside and looks up to heaven teaches us that such power must come from heaven, working in the heart of man by divine power. Thus we must first hear the Word of God and, through the intercession of Christ, obtain faith. Then we will publicly confess and praise God forever.

Luther, Martin, and John Sander. Devotional Readings from Luther’s Works for Every Day of the Year. Augustana Book Concern, 1915, pp. 309–10.