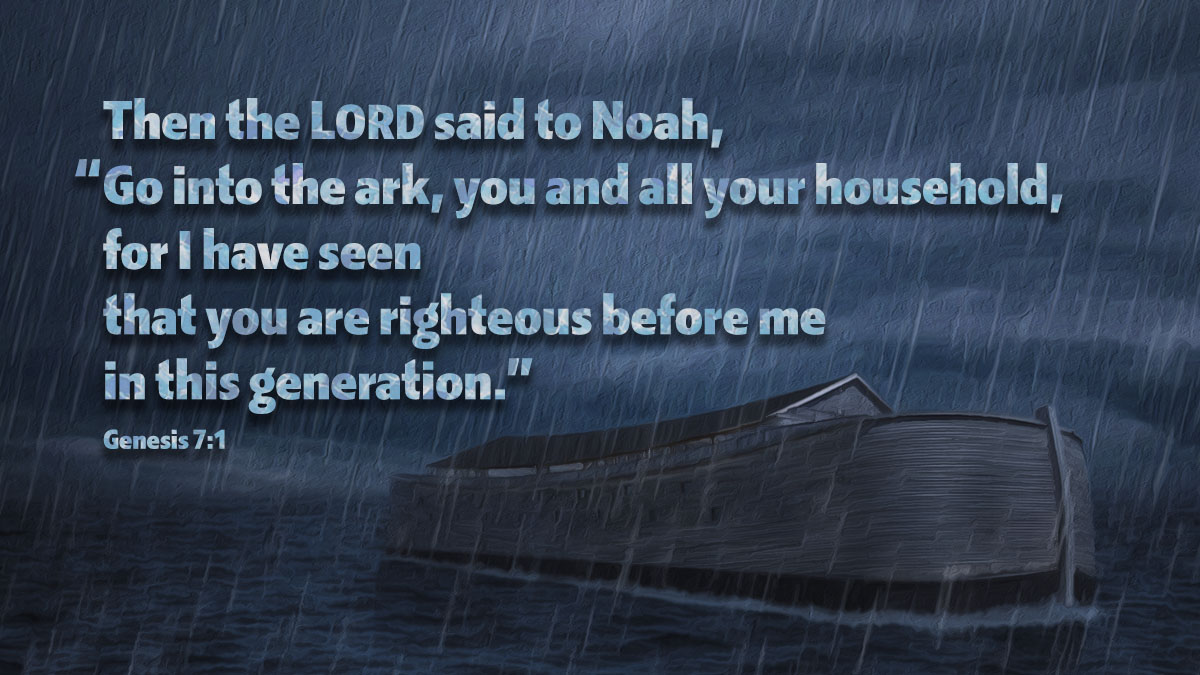 Then the LORD said to Noah, “Go into the ark, you and all your household, for I have seen that you are righteous before me in this generation.

As soon as that extraordinary structure, the ark, was built, the Lord commanded Noah to enter it, because the time of the deluge, which the Lord announced one hundred and twenty years before, was now at hand. All this convinced Noah that God was taking care of him; it gave him ample and abundant word to support and confirm his faith in such great straits. Noah, being holy and just, a kind and merciful man, often struggled with his own heart, hearing with greatest agitation of mind the voice of the Lord, threatening certain destruction to all flesh. It was needful, then, that repeated declaration should confirm his agitated faith, lest he might doubt.

Could words be more appalling than these, that Noah alone was righteous before the Lord? It is a fearful thing to live in such an evil and godless world. By the goodness of God we are in the golden age, since we still have the light of God’s Word. The sacraments are rightly administered in our churches, pious preachers proclaim the pure Word, and though magistrates be weak, wickedness is not desperately rampant. If there had been more godly teachers in the days of Noah, there might have been more righteous people. The fact that Noah alone was proclaimed a righteous man makes it evident that the godly teachers had been either destroyed or corrupted, leaving Noah the sole preacher of righteousness.

Noah’s faith was truly great; he could rely upon God’s utterance. I realize what weight the whole world’s hostile and condemnatory judgment must carry. We are condemned in the judgment of the pope, the Sacramentarians, and the Anabaptists, but this is mere play and pleasure, compared to what the righteous Noah had to bear, who found not a single person in the whole world to approve of his religion or life, except his own sons and his pious grandfather. Therefore, Noah is a brilliant and admirable example of faith, who opposed the judgments of the world with an heroic steadfastness of mind in the assurance that he was righteous while all the rest of the world was wicked. It is helpful often to reflect upon such examples, since the prince of this world battles against us, endeavoring to kindle despair in us. It behooves us to be well armed.

Luther, Martin, and John Sander. Devotional Readings from Luther’s Works for Every Day of the Year. Augustana Book Concern, 1915, pp. 264–65.