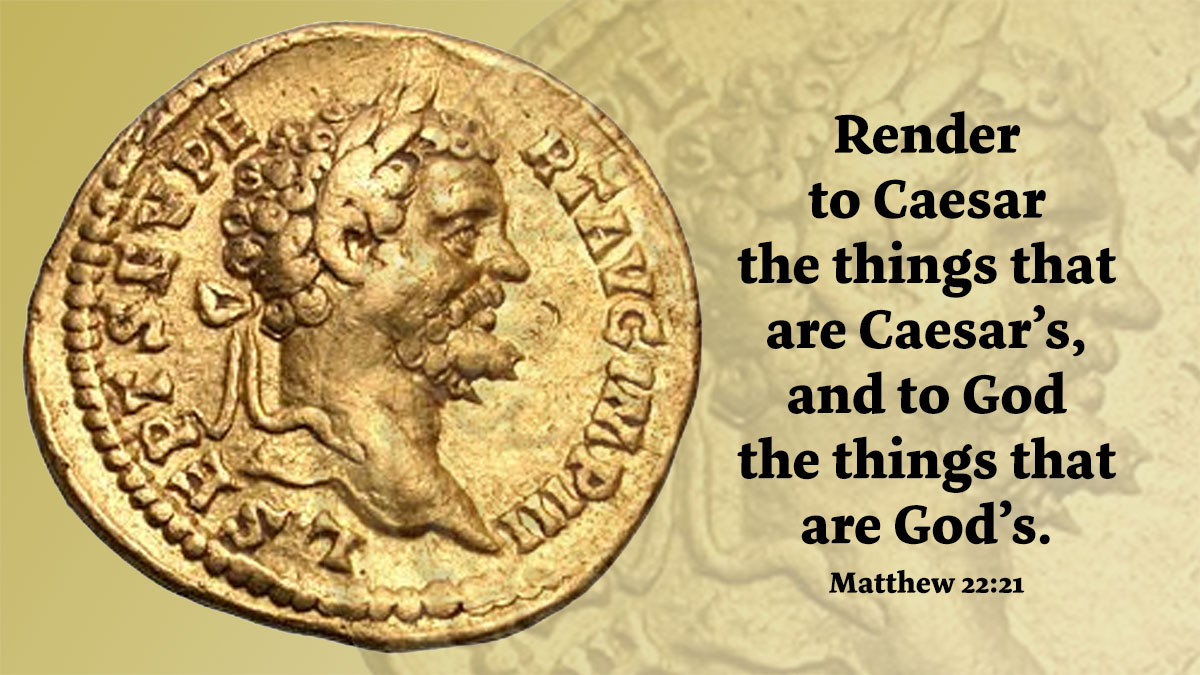 15 Then the Pharisees went and took counsel how to entangle him in his talk. 16 And they sent their disciples to him, along with the Herodians, saying, “Teacher, we know that you are true, and teach the way of God truthfully, and care for no man; for you do not regard the position of men. 17 Tell us, then, what you think. Is it lawful to pay taxes to Caesar, or not?” 18 But Jesus, aware of their malice, said, “Why put me to the test, you hypocrites? 19 Show me the money for the tax.” And they brought him a coin. 20 And Jesus said to them, “Whose likeness and inscription is this?” 21 They said, “Caesar’s.” Then he said to them, “Render therefore to Caesar the things that are Caesar’s, and to God the things that are God’s.”

We must keep this truth before our eyes; it is our rule of conduct toward the two kingdoms, God’s and Caesar’s, so as to give to each the honor due him. In both there are many who abuse the charge and position committed to them, especially toward Christians. We must suffer this, but at the same time we maintain our right to punish them by word of mouth, telling them the truth and hurling back the accusations heaped upon us. In so doing we satisfy justice and fulfil our duty; the rest we commit to God.

The teaching of Christ is the doctrine we insist on, that the two powers, God’s and Caesar’s, or spiritual and temporal kingdoms, must be kept apart, as Christ does here in clear and brief declaration, making not only a distinction, but also finely illustrating how each is to be considered and administered. It is ordained of God that subjects shall give to their rulers what they need; when he commands them to give, it is implied that these may take; and where we are to give what is due, there we infer that we owe them something, so that the language might be “return” rather than simply “render” or “give.” This is something for subjects under civil authority.

On the other hand, there are restrictions placed upon rulers that they govern in the same spirit, and not take from their subjects what is not due them; that they remember to give and do also what they are in duty bound to do by virtue of their presiding over countries and nations, so that they may grow and prosper. That is why rulers are elevated by God to their respective positions of honor, not that they hold their positions as extortioners, doing what they like.

If this were emphasized it would be found that the world is full of real thieves and rogues, rulers as well as subjects, and the number would indeed be small, from the highest to the lowest, who obey and do what is right. Subjects are most generally disposed to cheat their ruler and appropriate to their own use what is his, to say nothing of giving cheerfully. Princes and officeholders wish to have the name of being Christians, yet they do only what suits them and would gladly usurp the places of their superiors.

Luther, Martin, and John Sander. Devotional Readings from Luther’s Works for Every Day of the Year. Augustana Book Concern, 1915, pp. 237–38.