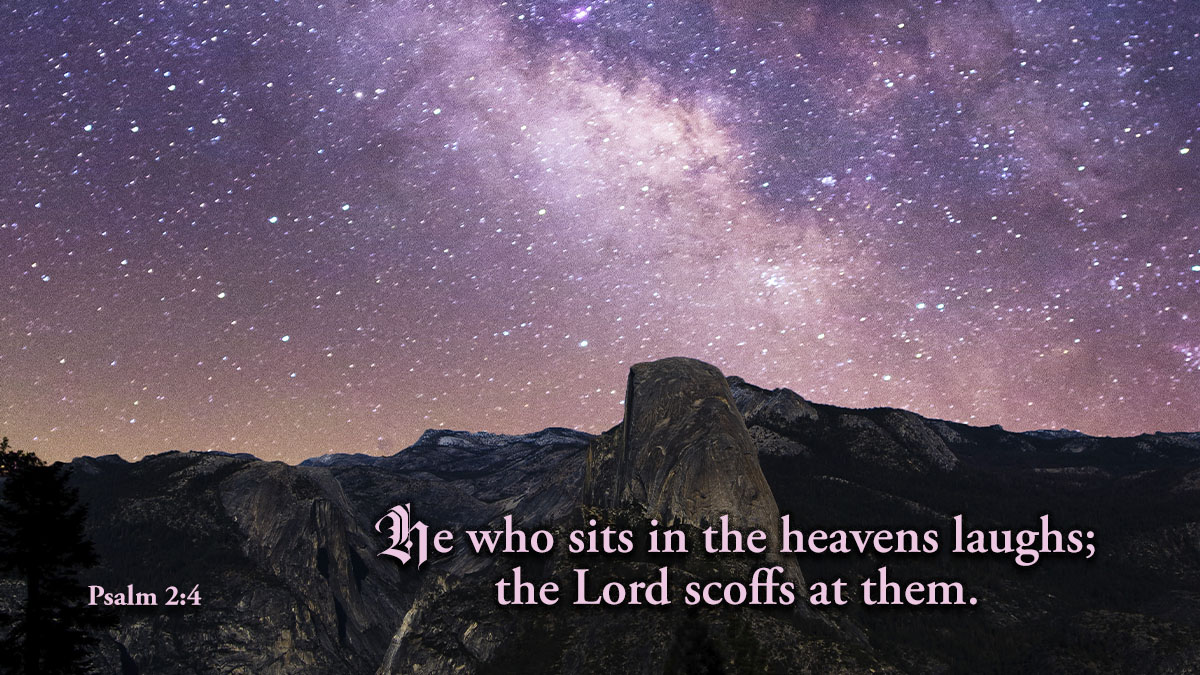 1 Why do the nations conspire, and the peoples plot in vain? 2 The kings of the earth set themselves, and the rulers take counsel together, against the LORD and his anointed, saying, 3 “Let us burst their bonds asunder, and cast their cords from us.” 4 He who sits in the heavens laughs; the LORD has them in derision. 5 Then he will speak to them in his wrath, and terrify them in his fury, saying, 6 “I have set my king on Zion, my holy hill.”

These things are written for our sake, “that through patience and through comfort of the Scriptures we might have hope.” What is written in this psalm with reference to Christ is applicable to all Christians, for whoever sincerely desires to be a Christian, will bear with his Herods, his Pilates, his rulers, his kings, his people and his heathen who rage against him, meditate vain things, rise up and take counsel together against him. For if these things are not done by men, they will be done by devils, or at least by men’s own conscience, and certainly in the hour of death; then there is need of remembering this and like consolations, “He that sitteth in the heavens shall laugh at them; the Lord shall have them in derision,” and of standing firmly in this hope and being moved by no circumstances whatever.

But this derision is divine. God made the Christ-murdering Jews and Gentiles a derision to the whole world by raising Christ from the dead and making, out of his despairing kingdom among that one people, a kingdom that shall flourish eternally over all creatures, thus turning all their endeavors into an event the very contrary of what they expected. Therefore as in the preceding verses the passion and death of Christ are prophesied, so in this verse his resurrection is predicted, though by a somewhat obscure allusion. Who would have thought, while Christ was suffering and the Jews triumphing, that God was laughing at them all the while! So also while we are oppressed, how shall we believe that God is holding our adversaries in derision, when it seems to us as though we were held in derision both by God and men? What a power of faith is required in all these words!

But his sitting in heaven is so secret and hidden that unless thou be in heaven thou canst not know and understand it. Thou art suffering upon earth and the hope of help is denied thee in all things by all, until, rising by faith and hope above all things, thou mountest up to reach unto him who sitteth in the heavens. Here it is that the anchor of our heart is to be cast in all tribulation, and all the evils of the world will not only be made easy to bear, but will become a derision.

Luther, Martin, and John Sander. Devotional Readings from Luther’s Works for Every Day of the Year. Augustana Book Concern, 1915, pp. 390–91.